The information and resources on this webpage are designed to help woodland landowners in north-central Minnesota. The St. Louis Moraines and Tamarack Lowlands area spans 3,162,113 acres in parts of Aitkin, Carlton, Cass, Crow Wing, Itasca, and St. Louis counties. 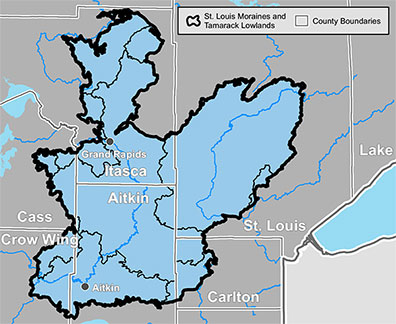 North-central Minnesota is home a multitude of wildlife species. Learning about the animals that live in your woods is a great way to connect to the habitat. Get to know your critters and keep on the lookout when you walk your property. Minnesota has about 350 species in greatest conservation need that are either rare, declining, or threatened. Examples in your area include sharp-tailed grouse, northern goshawks, boreal chickadees, yellow rails, wood turtles, and the four-toed salamander.

The list of plants for this area is exhausting. From small flowers to ferns to towering pines, naming them all is impossible! Getting familiar with the common native trees in your area is a great way to start.
Wood lot Tree Planting and Care learn about native landscaping, what trees to plant, where to find native tree stock, and what to know before you plant. Find the right tree for your property.

The St. Louis Moraines subsection has rolling hills with steep slopes caused by glacial deposits called moraines. The Mississippi River cuts through portions of the area, but small, relatively short rivers are present, including the Prairie, Willow, Hill, and Moose rivers. Lakes are common, and many are greater than 160 acres in size. North of Grand Rapids, located in the center of this subsection, white pines mixed with sugar maple, basswood, and balsam fir were common before European settlement. In contrast, south of the city were mainly northern hardwoods. Conifer swamps and bogs were scattered throughout the area. The fire was an important disturbance for maintaining the large blocks of white and red pine forests. Most of the red and white pines were removed by the early 20th century. Today the primary tree species harvested are quaking aspen. Expanding residential development on lakeshores is a major concern, especially on steep slopes and wet areas previously seen as undesirable for development.

The Tamarack Lowlands is a low-lying subsection consisting largely of a flat to gently rolling ancient lake plain surrounded by a till plain. Numerous major rivers meander extensively through this section, including the Mississippi, St. Louis, Whiteface, East Swan, Savannah, and Willow rivers. Few lakes are located here. Before European settlement, lowland conifer such as black spruce, tamarack, and white cedar, and black ash swamps dominated the area. Aspen-birch and upland conifers grew in upland areas. Sedge meadows were also prevalent. In the early part of the 20th century, homesteaders drained areas to create agricultural fields, but it was largely unsuccessful. Currently, the predominant forest type is conifers in lowland areas and aspen in uplands. This area is one of the top wildlife-watching sites in Minnesota, and the nation, due to its extensive wetland vegetation and a high percentage of public land.

Despite the abundance of water, the region received only 23 to 27 inches of rain a year, of which about 40 percent falls during the 4-month-long growing season.

Logging, forest management, tourism, recreation, and some agriculture are important industries in this area. Fishing, hunting, snowmobiling, and skiing are among the popular pastimes in this area.

While north-central Minnesota is in the coniferous forest biome (or Laurentian Mixed Forest), we use the Ecological Classification System (ECS) to focus landscape information on a more local level. The ECS divides the landscape into progressively smaller areas based on similarities and differences in climate, geology, natural features, and plants. This webpage focuses on St. Louis Moraines and Tamarack Lowlands subsections, which contain deciduous and coniferous trees.

The DNR created a detailed plan for forests in north-central Minnesota to help land managers put their land in context with state land management goals for the area. In addition, the Minnesota Forest Resources Council has created a North Central Plan to guide any landowners toward common management goals for sustainable forests, clean water, productive forests, and healthy wildlife habitat.

A watershed is the total area of land surrounding a body of water (such as a lake, river, or stream) that drains water into that body. Watersheds can be small or large. Small watersheds surrounding creeks and streams join to create larger watersheds surrounding major rivers. North-central Minnesota is located along a great divide in North American water flow. Depending on your land's exact location, your actions can affect the quality of water that will flow either into Hudson Bay by way of the Rainy River or into the Gulf of Mexico by way of the Mississippi
What watersheds are and why they are important
Learn more about your watershed