Fishing for bluegills is a favorite Minnesota pastime. The state's most commonly caught fish, the bluegill is abundant in most Minnesota lakes and many of its rivers.

A member of the sunfish family, the bluegill is prized table fare, and large "gills" put up a surprisingly good fight.

If you have never fished for bluegill now is a great time to start. They are relatively easy to catch with the proper tackle and technique. 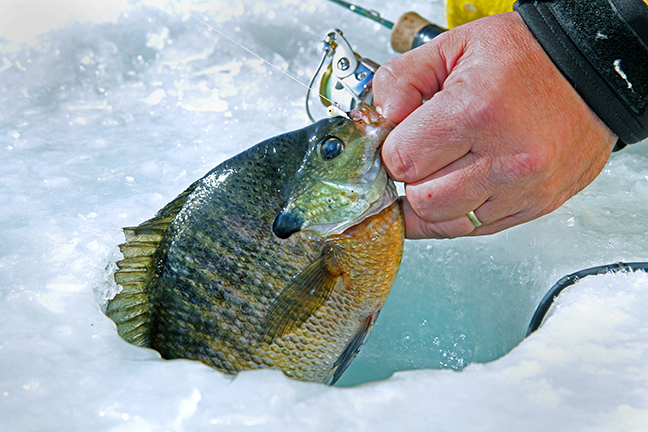 Fishing for bluegill is continuous, meaning you can target bluegill at any time of year. Limits can vary from place to place, size restrictions may exist and fishing for them in a particular lake could be closed or limited.

Most Minnesota lakes and rivers contain bluegill and other sunfish but not all. So, if you intend to target bluegills, a good place to start is our LakeFinder tool, which contains fish population information for more than 4,500 fishing lakes.

Bluegills can be in shallow or deep water in winter. Their location varies from lake to lake based on lake depth, lake shape, water clarity, vegetation growth, time of year, food availability, oxygen levels and other environmental factors. There is no one answer for where you will find sunfish.

Still, there are places you are more likely to catch fish. These include deep holes, humps, vegetated structure, shallow weedy flats, narrows and along or just off points that jut into deeper water. Lakefinder includes contour maps that can help you find some of these prime locations.

Sunfish are often found in and around underwater vegetation, especially cabbage-like growth and coontail. However, if these weeds have died and turned brown they are less likely to hold fish.

Those who fish with an underwater camera or sonar unit clearly have an advantage in determining where sunfish are or aren’t. Still, even if you do not have these types of fishing aids, you can get a pretty good sense of where fish have been biting by simply observing where ice fishing houses are congregated or where others have driven and drilled holes. There is no guarantee these people were fishing for bluegill but they likely were fishing in an area where there is underwater structure that attracts and holds fish.

Some anglers prefer to fish without a bobber. These anglers drop their lure to the bottom of the lake, wait for the line to go slack (this signals the lure has hit bottom) and then lift the lure a few feet off the bottom. After that, they pay close attention to the line and rod tip. They set the hook if the rod tip twitches, the line goes slack or if the line moves in an unusual way. Those fishing with a camera or sonar unit drop their lure to the depth where they see or are marking fish. Those without these technological advantages tend to start fishing near the bottom of the lake and then experiment at higher locations until they either find fish or decide to move elsewhere.

A common technique when fishing for bluegills is to “jig,” meaning you twitch or lift the rod to entice a bite. This up-and-down motion creates the appearance of food naturally falling through the water. While there is no universal rule on how often to jig do know you can over-jig, thereby scaring sunfish away rather than attracting them to your lure.

You can fish with two lines in Minnesota when fishing through the ice. Bluegill anglers commonly jig with one rod and leave the other alone. Sometimes the rod that is jigged catches most of the fish; sometimes the untouched rod that dangles a motionless bait catches more fish.

Ice fishing jigs, flies and spoons come in many difference colors and shapes. It’s best to have a variety and to experiment as some lures may work better than others on particular body of water. When fishing weedbed areas it’s best to fish just over the tops of them or along the edges rather than in them.

Because sunfish have small mouths and their diet is largely macroinvertebrates (insects and small crustaceans), start by using smaller sized jigs to more appropriately match your quarry and their preferred prey.