Spearing is a fascinating way to harvest one of Minnesota's largest fish. Looking down from above, you seek  – and see – the fish in its world rather than blindly pulling the fish in on a line strung with enticements and attractions from your world.

Found in in nearly every Minnesota lake and river, the northern pike is a voracious predator. That instinct draws it to the decoy dangling in the portal from which you'll be peeking into the northern's world.

Though somewhat challenging to fillet, the northern pike is excellent table fare. 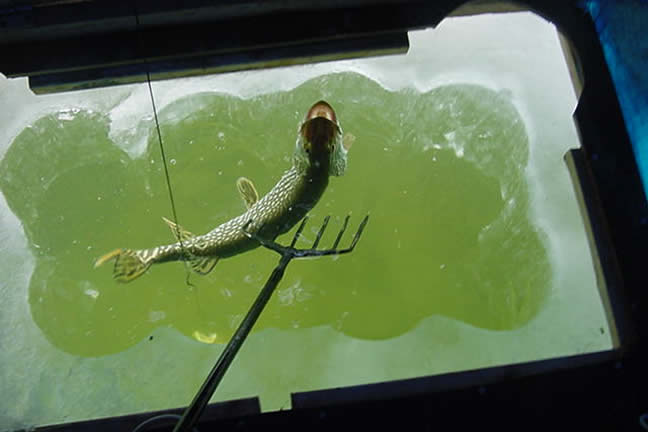 Generally, spearing is limited to rough fish such as sucker. But spearing on the ice for northern pike is allowed from mid-November to the last Sunday in February. Check the fishing regulations for specific information.

Minnesota has three northern pike zones and regulations vary depending on where you're spearing. You'll find the regulations for each zone listed in the inland waters section of the online fishing regulations. For an explanation of what these regulations are designed to accomplish, check out our northern pize zones page.

Even with the zones in place, some Minnesota waters still may have special regulations in place for pike. Check to see if this list contains the lake in which you're spearing.

Most Minnesota lakes and rivers contain northern pike but not all so, if you intend to spear northern pike, a good place to start is our LakeFinder tool, which contains fish population information for more than 4,500 fishing lakes.

Northern pike in winter in many of the same places you find them in autumn – points, narrows, vegetation lines and other vegetation places where this top predator can hide while waiting to ambush prey. Lakefinder includes underwater topographic maps that can help you find some of these prime locations.

Typically, northern pike spearing occurs in relatively shallow water, commonly in the six-to 10-foot range. Spearing works best if your dark house is over a sandy or light-colored bottom rather than a dark muddy bottom. That’s because northern pike show up better when suspended over a light background.

Spearing is a fascinating way to harvest a northern pike but it requires equipment different from standard ice fishing. So, if you want to try spearing you will need to borrow or buy a few specialty items, including a spear, dark house or roomy portable shelter, fish decoys, ice chisel, ice saw, auger and maybe even ice tongs.

Given the item you need, a good way to get into spearing is to try it first with someone who knows how to do it.

So how do you do it? Here are the basic steps: