Crappie fishing is a big part of Minnesota's fishing scene.

In fact, a recent study determined that only the walleye surpasses the crappie as the state’s favorite fish to catch. This is due, in part, to the crappie’s fine flavor and its prevalence in most Minnesota lakes and many rivers.

If you have never tried crappie fishing now is great time to start. 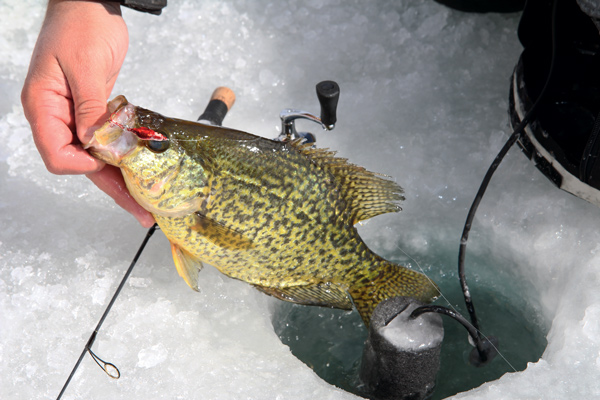 Fishing for crappies is continuous, meaning you can target crappie at any time of year. Limits can vary from place to place, size restrictions may exist and fishing for them in a particular lake could be closed or limited.

Most Minnesota lakes and rivers contain crappie but not all so, if you intend to target crappie, a good place to start is our LakeFinder tool, which contains fish population information for more than 4,500 fishing lakes.

There is no single answer for where to fish. All lakes are different in terms of shape, depth, bottom contours, oxygen levels and other biological factors. That said, the mouths of shallow bays that lead to deeper water can be a good place to start. That’s because after ice forms water temperatures in shallow bays are colder than deeper water and crappie respond to this change by moving to deeper water to conserve energy and find forage.

Crappie also can be found on or near drop-offs, shelves, points, narrows, weedy flats or other types of structure. Crappie typically aren’t found near the surface or the bottom. Instead, they tend to suspend somewhere in between, often slightly deeper than suspended bluegills.

LakeFinder includes underwater topographic maps that show a lake's contours and can help you find some of these prime locations.

Those who fish with an underwater camera or sonar unit clearly have an advantage in determining where crappie are or aren’t. A schooling species, crappie often are on the move.

That’s why many savvy anglers who find a school of crappie also drills holes in nearby deeper and shallower water. They do this because if the school moves, they can perhaps find them again. The nice thing about crappies is that if you find them, you generally can catch them.

Some crappie anglers prefer to fish without a bobber. These anglers drop their lure to the bottom of the lake, wait for the line to go slack (this signals the lure has hit bottom) and then lift the lure a few feet off the bottom. After that, they pay close attention to the line and rod tip. You set the hook if the rod tip twitches, the line goes slack or if the line moves in an unusual way.

Those fishing with a camera or sonar unit drop their lure to the depth where they see or are marking fish.

Those without these technological advantages tend to start fishing near the bottom of the lake and then, over time, experiment at higher locations until they either find fish or decide to move elsewhere.

Typically, crappies are suspended in the water column as opposed to walleye and perch, which typically forage within a foot or two of the bottom.

Many times, crappies attack their prey from below, rising up to the bait and inhaling it. The result is what anglers call an “up bite.” You can detect such a bite when the bobber goes slack or, if fishing without a bobber, the gentle bend in the sensitive tip of the rod straightens or the line goes slack as the fish has lifted up and sucked in the bait.

A common technique when fishing for crappies is to “jig,” meaning you twitch or lift the rod to entice a bite. This up-and-down motion creates the appearance of food naturally falling through the water column.

You can fish with two lines in Minnesota when fishing through the ice. Crappie anglers commonly jig with one rod and leave the other alone. Sometimes the rod that is jigged catches most of the fish; sometimes the untouched rod that dangles a motionless bait catches more fish.

If the rod that isn’t being jigged catches most of the fish, that’s a clue you may be jigging too aggressively. While crappie fishing, sometimes your jigging rod serves as a “calling rod,” to attract crappies to your hole where they instead will bite on your suspended minnow on your second line.

Ice fishing jigs, flies and spoons come in many difference colors and shapes. It’s best to have a variety and to experiment as some lures may work better than others on particular body of water.

When fishing weedbed areas it’s best to fish just over the tops of them or along the edges rather than in them.

Because crappies’ diets include larger items like minnows, darters, and large insects, begin fishing with medium sized jigs and experiment. Don’t be afraid to try louder or flashier jigs, even small jigging spoons, to draw in crappies. And tip your jigs with bait mentioned earlier – wigglers/Eurolarvae, meal works, wax worms, crappie minnows or cut a crappie minnow in half and thread the head on the hook. Crappies have large mouths capable of inhaling large prey items.