They are prized table fare, too. Lake trout is delicious when grilled, baked, fried, or smoked.

The right habitat conditions are crucial. A lake must be cold enough to support lake trout through warm summers as well as having abundant open water prey such as cisco. 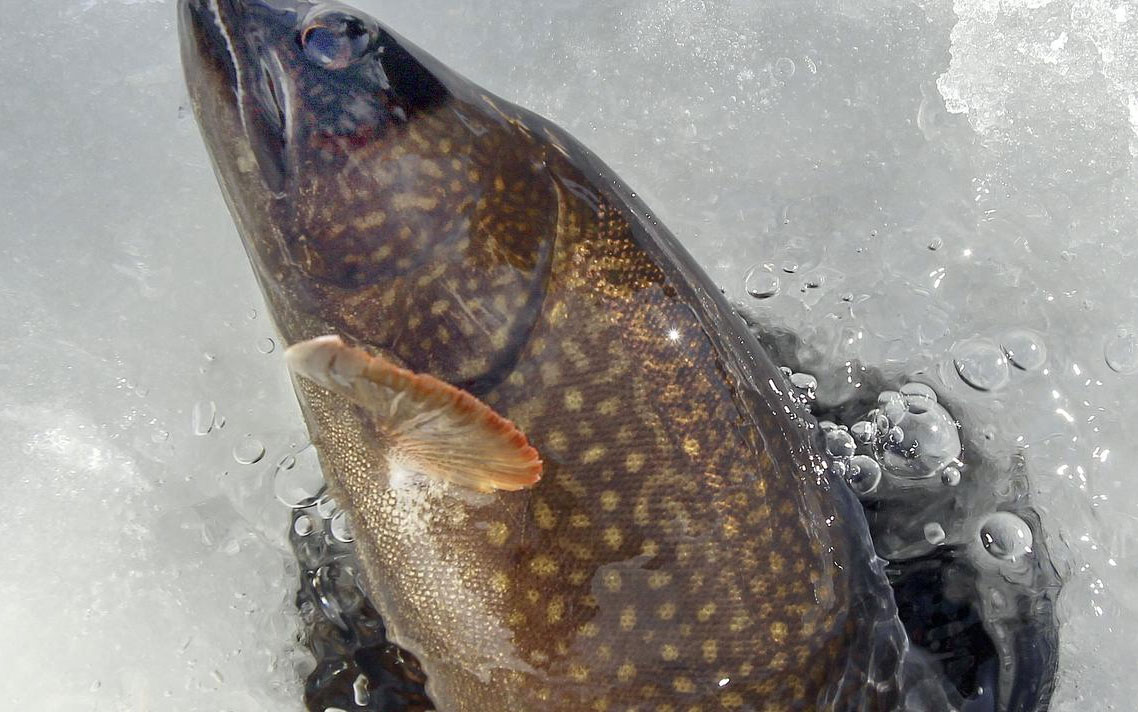 To find lakes with lake trout, you’ll want to refer to this list of trout lakes.

Lake trout are open water predators, cruising over basins searching for prey items. Finding forage species – such as suspended ciscoes or rainbow smelt – is a good way to find a likely place to fish for lake trout. If you find their prey, you are likely to encounter a lake trout at some point in the day.

You also can find lake trout cruising habitats that are likely to hold prey, such as slow-dropping shorelines, islands, reefs, points or entrances to bays. Lake trout anglers prefer structure that is adjacent to deep water. Lakefinder includes underwater topographic maps – also called lake contour maps – that can help you find some of these prime locations.

In years with particularly cold weather, Lake Superior gets sufficient ice out from its shoreline to allow safe ice angling. Superior has a tremendous lake trout fishery and by virtue of how quickly the depth drops from shore, anglers don’t have to go out far to get deep enough to encounter lake trout. Check with local bait and tackle shops for updates on ice conditions before venturing out; Superior’s ice can last as long as a few weeks but can be destroyed by wind and wave action in just a few days.

Lake trout anglers can catch fish in water shallow enough for sight fishing, but more frequently begin in depths of 30 or 40 feet and move out to as deep as 90 or 100 feet, or even deeper on especially deep waters such as Lake Superior. You may wish to move around and try a variety of different structural locations on a lake or park over a likely location and wait for the roaming fish to move in under you.

Lake trout can be caught via active rod and reel jigging, or by passive placement of a set line on a tip up rig. A tip-up rig is different than a rod-and-reel combination because there is no rod at all. Instead, a tip-up is an apparatus in which the reel is placed in the hole you drilled, and when a fish unspools line a signal flag “tips up.” Tip-ups can be purchased at virtually any bait shop or retail fishing outlet.

Once you have lowered your tip-up line into the water it is largely a waiting game. It is smart to check your sucker or shiner minnow every half hour or so, and even to jig it once in a while. You can use a live or dead bait; lake trout are opportunistic predators. A tip-up is a great way to utilize a second fishing line, which is allowed while ice fishing on Minnesota inland waters.

When fishing as part of a group, it makes sense to apply some strategy as to where you drill your holes and how deep to suspend your minnow in each hole. For example, if fishing a deep drop-off, you may want to place tip-ups at the 40-, 50- or 60-foot contour. Similarly, if you are fishing a point that extends into the lake you may want to set tip-ups at various depths along the point, starting in shallow and then drilling additional holes every 20 or 30 yards into deeper water. You must fish within 200 feet of your tip-ups.

Once a flag does fly, avoid the temptation to run toward it. Ice is slippery and there is no sense hurting yourself. Grab the tip up, raise it slowly to not create too much resistance, and grasp the line. If the fish is still swimming with your bait, set the hook with a quick snap of the wrist and arm. If 15 seconds or more have passed and this fish is swimming slowly – or you simply feel a dead weight on the line - well, that’s is a good time to set the hook too. It’s also possible that you’ll feel nothing at all. That means the fish has dropped your minnow.

When fishing lake trout with a jigging rod, use a medium heavy or heavy rod. You’ll be fishing heavy baits to cover the water column quickly and the fish you catch can be anywhere from a couple pounds to as large as ten or twenty pounds. You could even hook into a trophy of 30 or 40 pounds. Inspect your bait and jig it in the hole. Try to learn how to make it swim and dance delectably, and commit to memory the cadence used to impart the action. You’ll need to use the same delivery to your bait under the ice.