Minnesota is one of America's premier walleye ice fishing destinations, and if you haven't tried to catch one of these fish, well, you should.

Minnesota's state fish is a good fighter, tastes excellent and is common throughout most of Minnesota.

Minnesotans are so proud of their walleye fishing that two communities – Garrison and Baudette – each claim to be the Walleye Capitol of the World. 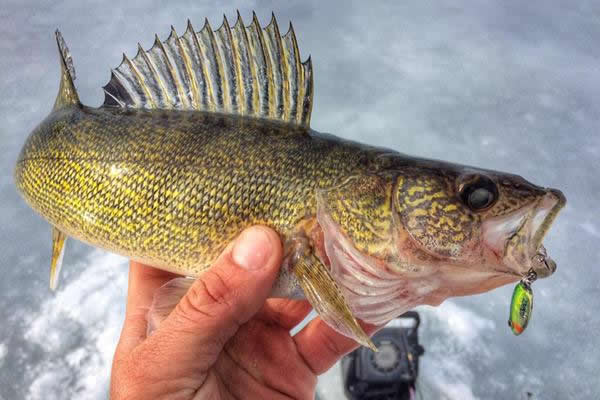 Generally, walleye can be caught from the opening day of fishing season in May through the last Sunday in February. But know that limits and dates can vary from place to place, size restrictions may exist and fishing for them in a particular lake could be closed or limited.

Many Minnesota lakes and rivers contain walleye but not all so, if you intend to target walleye, a good place to start is our LakeFinder tool, which contains fish population information for more than 4,500 fishing lakes.

You will find walleye in winter in many of the same places you found them in summer and fall – points, humps, narrows, drop-offs, saddles between humps or holes and other types of structure. Many walleye anglers fish in shallow water – perhaps 10 feet or less – during the low light conditions of dawn and dusk and move to deeper water during the brighter times of day. Lakefinder includes underwater topographic maps that can help you find some of these prime locations.

Those serious about catching a walleye through the ice may want to consider focusing their efforts on some of the state’s largest lakes that contain walleye. Specifically, Upper Red, Mille Lacs, Leech and Lake of the Woods are popular winter walleye fishing destinations.

Ice fishing for walleye is largely about drilling holes where walleye typically feed then jigging near the bottom with a lure tipped with a minnow or minnow head.

Walleye ice fishing lures come in many different styles, shapes, colors and sizes. It is best to bring a variety with you because sometimes walleye prefer small spoons and jigs while other times larger lures perform better. Similarly, sometimes a thin flashy fluttering spoon is the ticket while other times a virtually motionless jig in the shape and color of a minnow works the best. So, experiment. In time you will discover what lures catch the most fish in the water you fish, and which lures you feel the most confident using.

While some walleye occasionally suspend higher in the water column most commonly caught within a few feet of the bottom. In fact, some anglers like to occasionally drop their lure onto the bottom, thereby creating a small sediment plume that may attract the attention of a walleye. Though some walleye anglers fish with a slip bobber the majority prefer fishing without a bobber. They set the hook as soon as the fish strikes.

Walleye are piscivores, which means they primarily eat fish. That’s why tipping the hook of your lure with a minnow, minnow head or minnow tail makes sense. Some anglers hook their minnows through the tail. This tactic presents a live minnow to the walleye, indeed one that is often adding motion to the lure as it occasionally pulls this way and that.

Because you can use two lines while fishing in the winter in Minnesota, take advantage of this opportunity and suspend live bait under your second line in the hole next to you or deploy a tip-up no more than 200 feet away. A tip up is a spool of line with a flag release that will signal you when a fish has taken the bait. You can then walk over to the tip up, set the hook, and catch the fish. Tip ups allow you to cover a couple different depths and can be very productive when fishing with a group of licensed anglers in order to cover ambush locations on a larger structure.