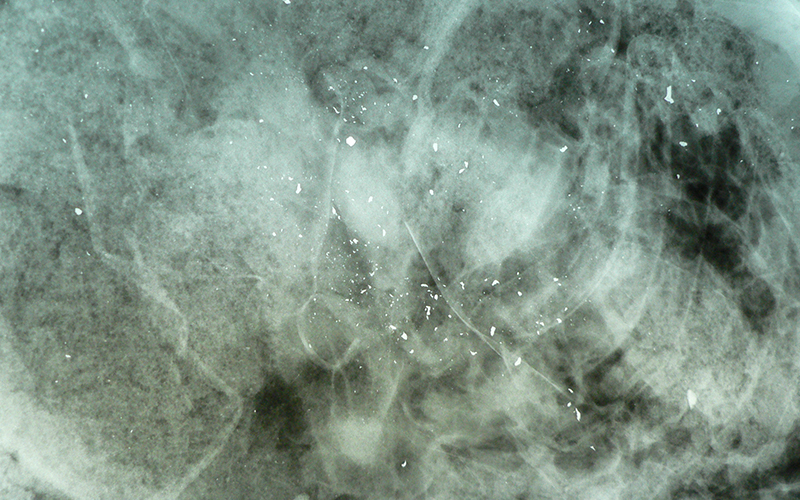 Lead fragments appear as white flecks in this x-ray of a radiographed sheep from the study.

The intent of the study was to conduct an experiment that would control for bullet caliber and focus on examining the variability of lead fragmentation and deposition associated with distinctly different categories of bullets and firearms used to harvest deer in Minnesota.

We selected bullets based on their advertised performance and consumer availability and found that using bullets with no exposed lead (a copper case completely surrounds the lead core) or copper are two ways to significantly reduce or eliminate lead exposure.

Copper and non-exposed lead core: These bullets averaged nine copper fragments in the animal with an average maximum distance from the wound channel of seven inches. By design, copper bullets leave no lead and the few fragments that were seen on x-ray were less than an inch from the exit wound.  Overall, both of these bullet designs fragmented very little and left no lead.

Ballistic tip (rapid expansion): These bullets had the highest fragmentation rate, with an average of 141 fragments per carcass and an average maximum distance of 11 inches from the wound channel.  In one carcass, a fragment was found 14 inches from the exit wound.

Shotgun slugs: These slugs left an average of 28 fragments at an average maximum distance of five inches from the wound channel.

Download the complete research summary for an in-depth explanation, discussion and analysis of the study, its design, the way it was conducted and its findings.