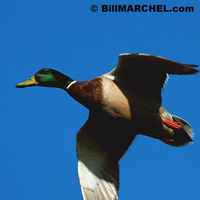 Minnesota has 23 species of ducks and geese.

Ducks are divided into two groups:

Puddle ducks live in shallow marshes (puddles) and rivers and feed by dabbling. You can often see their bottoms tipped up as they feed in the shallows. These ducks also feed often in grain fields. Puddle ducks are able to lift off from water or land immediately.

Diving ducks spend their time in large, deep lakes and rivers. They feed on fish, shellfish, mollusks, and aquatic plants by diving, often to deep depths. They can swim long distances underwater by kicking their large paddle feet. Diving ducks can't launch from water straight into the air like puddle ducks can. Instead, they patter along the water surface for several yards before becoming airborne.

There are several species of geese that can be hunted in Minnesota:

The largest is the Canada goose. Those that nest in Minnesota are called the "giant" subspecies and can weigh up to 16 pounds. Those that migrate through in spring and fall are the Eastern Prairie Population subspecies. These smaller Canada geese (6 to 8 pounds) breed in Manitoba and fly south through western Minnesota in the fall to winter in Missouri.

Minnesota also sees some snow, blue, and white-fronted geese. The blue goose, which is gray, is a color phase of the snow goose, which is white with black wing tips. White-fronted geese, also called "specklebellies" or "specs" are the same size as snows and blues and are often found flying with these other geese in massive flocks of up to several thousand birds.

Other huntable birds categorized as waterfowl are the red-breasted, common, and hooded mergansers. Mergansers are fish-eating birds that often fly in a straight line. Their beaks are much narrower than a duck's.