It's not uncommon for wintering deer to eat themselves to death despite having reserves of fat. The deer pictured above died after overeating from the pile of corn shown in the photo's background. Supplemental feeding can result in enterotaxaemia, a fatal disease commonly called grain overload.

While providing piles of corn, hay or other feed can be a feel-good act, it often results in bad consequences: disease, auto accidents, habitat loss and animal behavior changes. 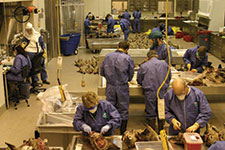 Supplemental feeding can closely congregate animals that would otherwise feed apart on natural foods. Tight concentrations of deer and elk, for example, dramatically increase the odds that an infected animal will spread chronic wasting disease, bovine tuberculosis or brucellosis via nose-to-nose contact as it eats feed contaminated by another animal's disease-carrying saliva or inhaling bacteria or prions left behind. 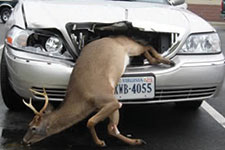 Supplemental feeding often draws animals away from their natural feeding and bedding areas to locations where they create traffic accidents. 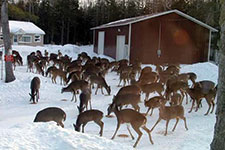 Supplemental feeding can make wild animals less fearful of humans, delay winter migration and even result in starvation if animals have not migrated to wintering areas and feeding ceases.

Feeding deer makes them less wild, more vulnerable to disease and subject to population increases above what the available natural habitat can support.

More is not merrier