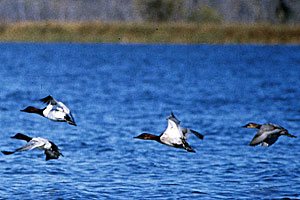 What is a Migratory Waterfowl Feeding and Resting Area?

Migratory Waterfowl Feeding and Resting Areas protect waterfowl from disturbance on selected waters of the state. Motors are prohibited on MWFRAs during the waterfowl season. (Electric motors of less than 30 pounds thrust are allowed on some areas.)

How many MWFRAs are there?

How is a MWFRA established?

MWFRAs are nominated by a petition process (at least 10 local, resident, licensed hunters must sign) and approved or denied by the DNR after public input is received. Since establishment of MWFRAs is initiated by a petition process, the selection of areas has been based on local interest rather than biological need. The Division of Wildlife has generally not been proactive in identifying and establishing specific MWFRAs, allowing local conservation groups to take the lead in initiating these processes.

For more specific information on individual MWFRAs please refer to the current hunting regulations. For more information on the MWFRA process or how to establish an MWFRA, contact your Area Wildlife Manager or the Shallow Lakes Program Leader.