These ecologically rich places are home to thousands of lakes, some remnant forests and wetlands, diverse wildlife, and an important migrating corridor for birds. 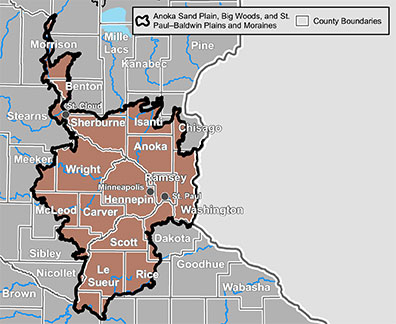 East-central Minnesota is home to a multitude of wildlife species, including some that are rare, declining, or threatened. The DNR refers to these as species in greatest conservation need. About 350 species are given this classification in Minnesota. Examples from the Anoka Sand Plain, Big Woods, and St. Paul–Baldwin Plains and Moraines include trumpeter swans, bobolinks, Blanding's turtles, American badgers, and gopher snakes, and a rare species of mussel found only in the St. Croix River, a few of its tributaries, and the outlet of Lake Pepin on the Mississippi River.

The list of plants for this area is exhausting. From small flowers, to ferns, to towering pines, naming them all is impossible! Getting familiar with the common native trees in your area is a great way to start.
Wood lot Tree Planting and Care learn about native landscaping, what trees to plant, where to find native tree stock, and what to know before you plant. Find the right tree for your property.

The Mississippi River forms the western boundary of the Anoka Sand Plain. A broad, flat, sandy lake plain dominates the majority of this area and forms the eastern and northern boundaries. Topography is level to gently rolling. Historically, the predominant vegetation was oak savanna and upland prairies surrounded by wetlands. Jack pine was present along the northern edge.

This subsection stretches across the northern Twin Cities area, including St. Cloud to the west and North Branch to the east, and has the second fastest-growing population in the state. Urban development has eliminated peatlands, prairies, and savannas. Some of the best examples of dry oak savanna in the state occur here.

The Minnesota River runs through the middle of the once predominately-forested Big Woods subsection. Topography is gentle to moderately rolling. The dominant landscape feature is circular, level-topped hills bounded by smooth side slopes. Broad level areas between the hills are interspersed with closed depressions containing lakes and peat bogs. Many of the lakes and wetlands are groundwater-controlled with no inlets or outlets. Before European settlement, common tree species were red oak, sugar maple, basswood, and American elm.

Today most of this subsection is farmed, and only a small fraction of the original "Big Woods" remains. More than 75 percent of this subsection is cropland, with an additional five to 10 percent pasture. Forested areas are widely separated from each other. The Twin Cities area continues to expand into this area. Both farming and urbanization have led to dramatic changes in habitat. Water quality is also a conservation concern in the agricultural landscape.

The St. Paul Baldwin Plains and Moraines subsection and encompasses much of the eastern half of the Twin Cities area, including St. Paul and its suburbs. The Mississippi River flows through the center and the St. Croix River forms the eastern boundary. Both rivers are important to wildlife, especially migrating birds. Oak and aspen savanna dominated before European settlement. Tallgrass prairie and maple-basswood forests were also common. Large moraines and outwash plains dominate this subsection.

Many recreational opportunities exist in these subsections, especially along large rivers and public parks and natural spaces.

While east-central Minnesota is in the deciduous forest biome (or Eastern Broadleaf Forest), we use the Ecological Classification System (ECS) to focus landscape information on a more local level. The ECS divides the landscape into progressively smaller areas based on similarities and differences in climate, geology, natural features, and plants. This webpage focuses on Anoka Sand Plain, Big Woods, and St. Paul-Baldwin Plains and Moraines subsections, which contain mostly deciduous trees.

A detailed plan was created by the DNR for forests in east-central Minnesota to help land managers put their land in context with state land management goals for the area. In addition, the Minnesota Forest Resources Council has created East Central and Southeast plans to guide any landowners toward common management goals for sustainable forests, clean water, productive forests, and healthy wildlife habitat.

A watershed is the total area of land surrounding a body of water (such as a lake, river, or stream) that drains water into that body. Watersheds can be small or large. Small watersheds surrounding creeks and streams join to create larger watersheds surrounding major rivers. Ultimately, water in east‑central Minnesota flows into the Mississippi River via numerous tributaries such as Minnesota and St. Louis. The actions you take on your land will affect the quality of water that flows into the Gulf of Mexico by way of the Mississippi.

Woodlands of Minnesota Handbook - Anoka Sand Plain, Big Woods, and St. Paul-Baldwin Plains and Moraines is both a reference and workbook. It contains information on the past and present condition of land in the regions, insight into some of the biggest challenges woodland owners face here, and tips for making and accomplishing goals for your woods.