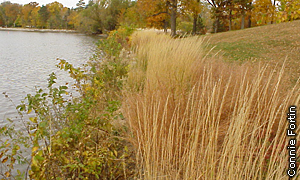 Sometimes, existing rip-rap is doing a satisfactory job of holding the earth in place, but is not as effective or as attractive as it could be. One solution that meets both objectives is to plant within the rip-rap rather than remove it.

A technique known as joint planting is one method of planting within rip-rap. Live stakes of readily sprouting native species such as willow or dogwood are tamped into openings between the rock. Another method uses a steel rod to create a pilot hole and then the live stake is tamped into the hole. 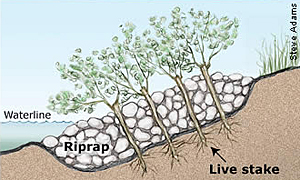 The live stakes, 1 1/2" or larger in diameter, must be cut and placed while they are dormant. The roots of these plants will reinforce the soil and dissipate energy from waves or stream flow.

Plants can be placed in soil between the rocks. A trowel-full of soil placed between rocks in the upper part of the rip-rap (above water) will provide a substrate for planting. This technique should not be used during high water conditions where soil may erode into the lake.

Size, density and age of the rocks determines whether the rip-rap is conducive to planting. In some cases, rip-rap can be seeded effectively with a mixture of grasses and wildflowers. 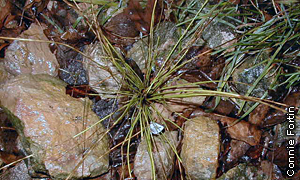 Vines are another effective option for softening the hard look of the rocks, such as Virgin's bower (Clematis virginiana ), Virginia creeper (Parthenocissus vitacea), and wild grape (Vitis riparia).

List of additional species suitable for planting in rip-rap

See the "Starter Lists" in the Native Plant Encyclopedia.