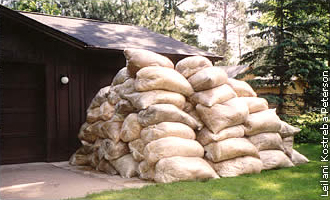 Twenty-two cubic yards of mulch were applied to hold moisture in the soil and to reduce weed growth. Bob remembers every cubic yard of it. 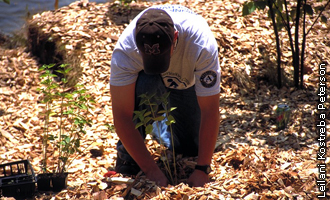 Plugs were planted through the mulch. To avoid planting in rows, three to six plants of the same species were grouped together with a spacing of eighteen inches between plants.

As Bob describes it, deciding what plants will go where can be a process of negotiation. Planting is the most labor intensive shoreland restoration approach. The Streetars property required over 240 hours to plant all the plugs.

Weed control became a challenge in identifying good plants from unwanted weeds and turfgrass. Before herbicide was applied, the Streetar's lawn was very healthy, and later in the summer, lawn continued to sprout in the project area.

Planting in the Riprap 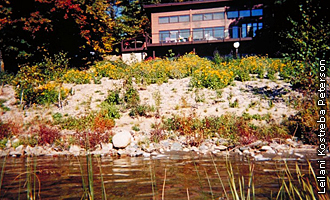 The riprap, by itself, was not preventing damage to the shoreline from the ice push. To develop an extensive intertwining root system that would more efficiently hold the soils in place, the Streetars planted native plants in the riprap. Red-osier dogwood, prairie cordgrass, and sedges with fibrous root systems were selected.

Finally, they planted several species of wildflowers to overcome the unattractive appearance of the riprap. Aquatic plantings were added to restore fish and wildlife habitat, to filter pollutants out of runoff, and to settle suspended sediments.

More about planting in the riprap from Leilani Kostreba Peterson.

Leilani Peterson notes that wave breaks can play an important role in establishing a buffer zone. 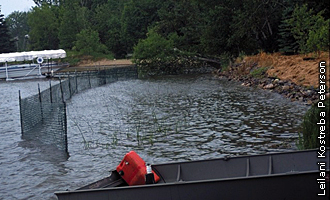 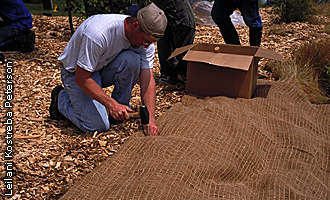 The coconut fiber erosion control blanket installed between the area where riprap was and the upland area protected exposed soil from erosion until new plants could take root and establish.