Most of us have enjoyed the cool, wet spring this year, especially compared to last year at this time in Minnesota, when 73% of the state was in the Abnormally Dry category according to the U.S. Drought Monitor. Even though there were some hot days in May, early cool and humid weather promoted fungal tree diseases such as anthracnose.

Anthracnose is a common disease that causes dark, irregular leaf blotches on ash, oak, maple, birch, and other shade trees. Leaves can become cupped or curled and fall off if the infection is severe, but trees usually produce a second growth by the middle of summer.

Anthracnose typically does not cause permanent damage, and while the leaf spots can be unsightly, they have little to no effect on the health of the tree. Healthy trees will recover on their own. To keep trees healthy, adequately water them during periods of low precipitation (like now), aiming sprinklers away from the leaves (water on leaves can encourage fungal diseases). 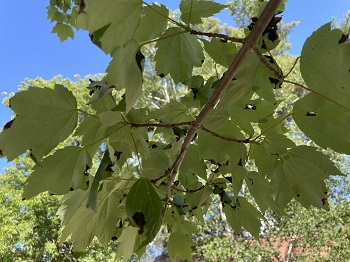 Basswoods with leaf damage have been recorded from Kandiyohi and Stearns counties all the way up to Beltrami and Becker counties. Much of the damage has been attributed to introduced basswood thrips. The introduced basswood thrips is a tiny insect that feeds on opening leaf buds. As leaves emerge and mature, they appear deformed and tattered, and trees may look defoliated. By the time damage is noticed it’s usually too late to look for the insects.

In some areas of northwestern Minnesota, basswoods were also hit by a late spring frost, which can damage developing leaves. Finally, basswood is not a drought-tolerant species and may still be suffering from the drought of 2021.

Basswoods that are mostly defoliated by thrips or frost can put out a new set of leaves in the same growing season. The new leaves may appear smaller, discolored, or misshapen. Although the damage on basswoods looks unsightly, nearly all of them will recover. 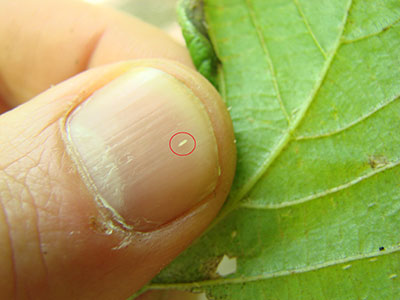 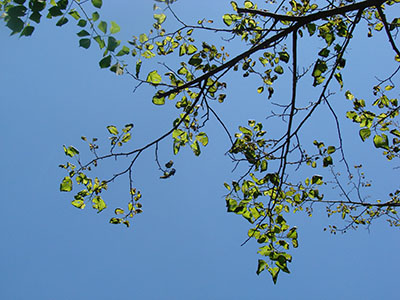 Abundant seed crops and sparse crowns with small leaf development on aspen and red maples were noticeable at the start of the growing season this year. People have wondered if the sparse tree crowns were caused by insect defoliation from forest tent caterpillar or another pest, but most likely last year’s drought stressed the trees, causing sparse tree crowns and prolific seed crop.

Stress events, particularly drought, can cause trees to shift their resources toward survival of the species. The tree's resources are put into seed production to ensure its progeny have a chance to survive in case the tree dies. As a result, there is not much energy left for trees to produce a full crown of leaves. These crowns will probably be thin throughout the summer, or it's possible for a second set of leaves to be produced in early to mid-July if there was any leaf loss.

The prolific production of fluffy, white aspen seed was remarkable earlier in June in Minnesota. Wind blows the white fluff into piles that accumulate, resembling the unlikely occurrence of a June snowfall. The cottony aspen seed is also quite flammable - its abundance on a forest floor in Nisswa caused a wildfire to quickly spread. All species in the Populus genus produce the fluff-like seed; quaking aspen, big-toothed aspen, balsam poplar, and cottonwood have all contributed to the noticeable seed crop. However, aspen is by far the most abundant of these tree species in Minnesota and is the main contributor.

If you can, water trees during drought to keep them healthy, especially newly planted trees. 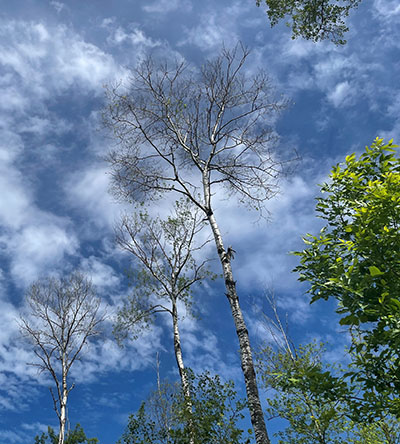 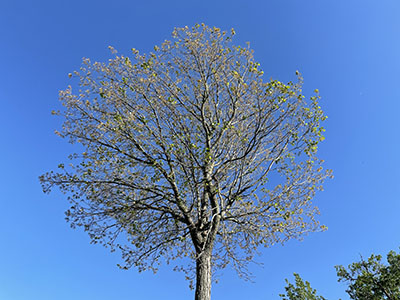 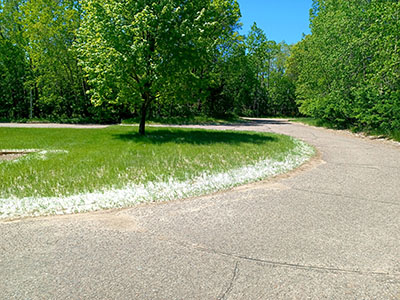 Whites seed fluff from aspen along a road.

When it rains, it pours: Early-season storms may aid the spread of oak wilt

Oak wilt, a fatal disease of oak trees, could experience a boon this year with all the unusually powerful and frequent storms across the state in May and June. How does storm activity promote the spread of oak wilt? Sweet-smelling spore mats that develop underneath the bark of trees killed by oak wilt attract sap-feeding beetles. The beetles become covered in oak wilt spores, and if a nearby tree is wounded, for example in a storm, beetles are attracted to those fresh wounds. Beetles can spread the disease in the months of April through July.

Unfortunately, populations of these beetles are typically highest in May and June, and they might carry oak wilt spores to a storm-damaged oak. Keep a close eye on any storm-damaged oaks and surrounding oak trees if you live or have property in the high-risk zone for oak wilt (areas within 20 miles of a previously confirmed case of oak wilt). These surrounding trees could be at risk of developing oak wilt in future years as the fungus can spread underground through connected root systems.

Keep in mind that trees are still recovering from the 2021 drought and may appear unhealthy due to other causes such as twolined chestnut borer. 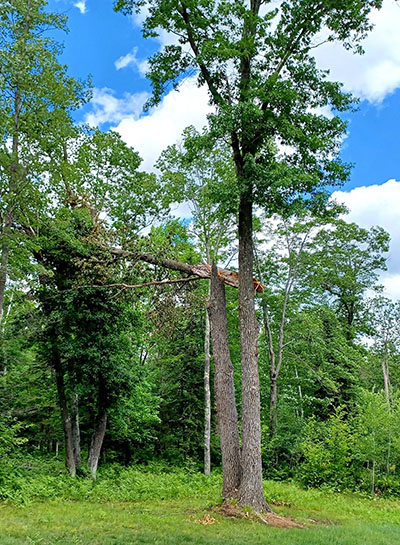