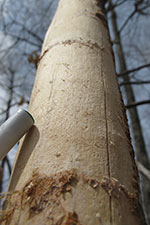 This is the time of year when people frequently begin to see bark stripped off maples, so it wasn't surprising for me to get a couple of reports of tree damage in central Minnesota (Crow Wing and Todd counties east to Pine County) the second week of February. Squirrel damage seems to be higher than normal in Houston County too. It was surprising when a DNR forester at Camp Ripley reported seeing fresh squirrel damage on maples in mid-January—that's early!

John Ball with South Dakota State University wrote in his January newsletter that he received several reports in early January of squirrels stripping bark off elms in South Dakota. He attributed that in part to warm and droughty conditions in autumn 2020 that could have concentrated sugars in tree bark. September in Minnesota was dry, and November 2020 was particularly warm. In fact, it was the eighth warmest November on record for the southern two-thirds of Minnesota. Perhaps that had something to do with the early squirrel feeding in Camp Ripley, but that is just a guess. 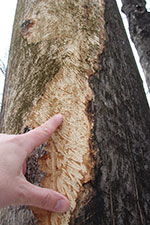 Squirrels aren't the only critters that remove upper trunk and limb bark—porcupines frequently do so too. Both of these mammals love sugar maples. Without seeing the culprit in action, there are a couple of ways to decide who is causing the damage. First, look at the size of teeth scrapes on the wood. Eastern gray squirrels leave scrapes that are 1.2 to 1.7 millimeters wide, while porcupines leave teeth scrapes that are about 3.5 to almost 5 millimeters wide. Another way to tell the difference, according to the Internet Center for Wildlife Damage Management, is if half-inch pieces of bark are lying below a stripped limb it indicates squirrels did the damage.

In small patches of woods, porcupines and squirrels can occasionally kill some trees, and that is certainly annoying! I once worked in a woodlot where it seemed either porcupines or squirrels killed limbs on some larger sugar maples every year, slowly killing the trees. Over the larger landscape, this damage is natural. If it is intolerable in your situation, you'll find many recommendations to prevent the damage on the internet. If you decide to take action against these critters, make sure you're doing it legally; see the Minnesota DNR's Taking a nuisance animal and Porcupine webpages for details.