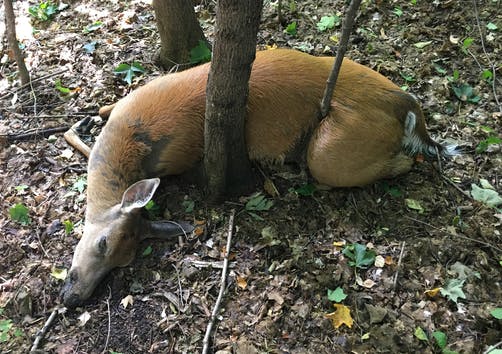 Epizootic hemorrhagic disease (EHD), which is spread by a biting insect called a midge, is a viral disease that occurs naturally and can infect white-tailed deer.

The disease was not found in Minnesota wild deer until September 2019 but it is common in the Midwest. Wisconsin, Nebraska, Iowa, Illinois, Michigan and Ohio report EHD mortalities in wild deer almost every year.

The disease can dramatically reduce a local deer population in the short-term but has a relatively small impact on the overall deer population. There are no management interventions available to combat the disease.

EHD is seasonal and most often occurs during drought-like conditions in the late summer and early fall. Frost will kill the virus and midge that carries it, ending the potential infection period.

A female midge of the Culicoides genus (commonly called a no-seeum) picks up the virus from the blood of an infected host and transmits the virus by biting another host. The disease cannot be transmitted deer-to-deer and does not remain on the landscape.

The incubation period is 5-10 days and most die within 36 hours after clinical symptoms appear.

Finding seemingly healthy multiple deer dead near water is typical of an EHD die-off. Fever drives the animals to seek water and they die from internal lesions and hemorrhages.

EHD has circulated in the southern United States for decades and outbreaks in deer there are typically mild or completely inapparent, detectable only by antibody blood testing.

The periodic movement of the EHD virus to the northern United States, where there is little history of previous exposure, can result in severe outbreaks with high localized mortality.