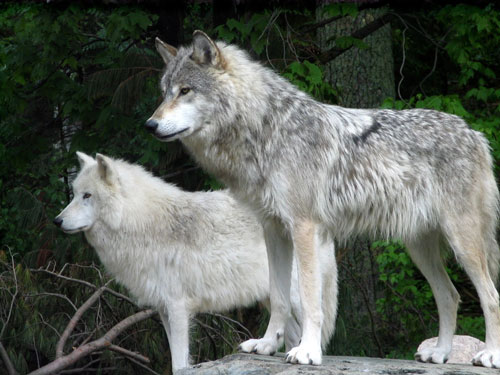 Minnesota's wolf legacy is unique: its northeastern corner of lakes and sub-boreal forest once sheltered the last remaining wild wolves in the lower 48 states. Wise and careful management under the Endangered Species Act allowed those remaining wolves to flourish and repopulate northern Wisconsin and Michigan's upper peninsula.

DNR is committed to a responsible, conservative and science-based management strategy that ensures the long-term survival of wolves in Minnesota recognizes the animal's legacy and Minnesotans' collective interest in and concern for this northwoods icon.

Effective Dec. 19, 2014, Minnesotans can no longer legally kill a wolf except in the defense of human life.

A federal judge's decision to immediately reinstate Endangered Species Act protections for gray wolves in Minnesota, Wisconsin and Michigan place the animals under protection of the U.S. Fish and Wildlife Service.

Only agents of the government are authorized to take wolves if depredation occurs. 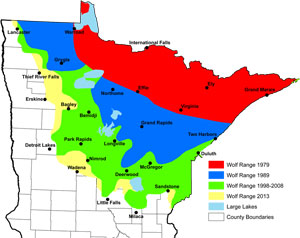 Estimated at fewer than 750 animals in the 1950s, Minnesota's wolf population now is estimated at 2,423 animals, 212 more wolves than estimated on the survey conducted in winter 2013.

The latest population survey results estimate that 470 wolf packs lived in Minnesota's wolf range this past winter, 212 more wolves than estimated on the survey conducted in winter 2013.

DNR's goal for wolf management is to ensure the long term survival of wolves in Minnesota while addressing conflicts between wolves and humans.

The table below lists known wolf mortality for the indicated year. Totals are compiled annually after April 1 each year.

1 Wolves shot when it was legal for the owner or owner's agent to do so to protect livestock or pets.
2 Excludes mortalities listed under legal shooting.

Can I shoot a wolf to protect my livestock or pet?

Wolves in Minnesota can only be killed in defense of human life.

Only agents of the government are authorized to take wolves if pets or livestock are threatened, attacked or killed.

Protect all evidence and report depredation incidents to a DNR conservation officer. Use the Conservation Officer Locator and leave a recorded message 24/7.

Are wolves dangerous to people?

In a word, the general answer is no. Wolves typically avoid people. But there are several well-documented accounts of wild wolves attacking people in North America.

In August 2013, a physically deformed and brain-damaged wolf bit a teenager near Lake Winnibigoshish.

Although there were no witnesses, two investigations have determined that wolves attacked and killed a young man in Saskatchewan in 2005 and a woman in Alaska in 2010.

Wolf attacks on humans in North America are rare, and, as a result, poorly understood. Accounts of wolves killing people persist in India and in Russia and parts of central Asia. It is a fact that when wild animals become habituated to people, they may lose their fear of humans, especially if they are fed or if they associate humans with providing food.

Like any large predator, wolves are perfectly capable of killing people. No one should ever encourage a wolf or any other wild animal to approach. Hikers and campers should take all necessary precautions to prevent mishaps involving wildlife. People should be mindful of the potential harm that wolves and other wild animals are capable of inflicting.

How do I practice wolf safety?

Don't make your home or camp attractive to wolves:

In the rare event that you do have an encounter with an aggressive wolf:

What can people do to protect livestock?

It is extremely difficult to predict when wolves may choose to attack and kill livestock; however, there are some methods that may decrease your risk of losing livestock to wolf predation. Livestock producers have reported these practices as being helpful:

What can people do to protect pets?

Pet owners can decrease the risk of losing their animals to wolf predation by:

What should I do if I suspect wolves have killed or attacked my livestock or pets?

If you suspect that wolves have killed your livestock, it is vital that you preserve the evidence of the incident by: