This area is home to thousands of lakes, vast stretches of northern forest, lush wetlands, diverse wildlife, unique plants, and the headwaters of the Mississippi River. 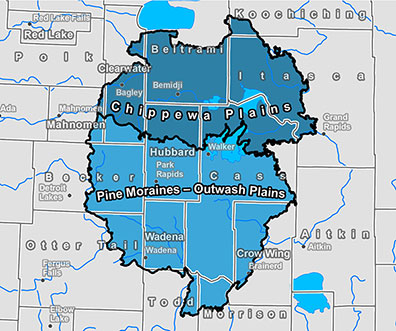 North-central Minnesota is home to a thousands of wildlife species. Learning about the animals that live in your woods is a great way to connect to the habitat. Get to know your critters and keep on the lookout when you walk your property. Minnesota has about 350 species in greatest conservation need that are either rare, declining, or threatened. Examples in your area include common loons, red-shouldered hawks, northern goshawks, northern long-eared bats, Canada lynx, American badgers, smooth green snakes, eastern hog-nosed snakes, and a species of caddisfly (chilostigma itascae).

Minnesota Biological Survey - collects data on rare plants and animals, native plant communities, and landscapes. Use it to find out about species in your county.

Pollinators - learn about what you can do to help these important insects and birds.

The list of plants for this area is exhausting. From small flowers, to ferns, to towering pines, it would be impossible to name them all! Getting familiar with the common native trees in your area is a great way to start. Find the right tree for your property.

Wood lot Tree Planting and Care - learn about native landscaping, what trees to plant, where to find native tree stock, and what to know before you plant.

There are 4.6 million acres of land in the Chippewa Plains and Pine Moraines—Outwash Plains. Flat to gently rolling plains are covered by glacial deposits called glacial drift, till, or moraines. Soils in this region range from sand to clay. The outwash plains formed by melting glaciers are especially sandy. The area is home to Lake the headwaters of the Mississippi River and glacier formed lakes like Leech Lake, Lake Winnibigoshish, and Cass. Despite all the water, the region receives only 23 to 27 inches of rain per year.

Before European settlement, much of the area was covered by aspen, birch, and Minnesota's three native pine species: jack, red, and eastern white. Fire frequently disturbed the landscape. Areas that did not burn contained pockets of northern red oak, sugar maple, and basswood or swampy lowland areas with black spruce, black ash, tamarack, and northern white-cedar.

Today, agriculture approximately 13 percent of the land is used for crops (mainly corn and potatoes) or pasture. Aspen has increased in forests and is used to make paper, biomass, and other products. Tourism and recreation are major industries in the region as well, with the forests and lakes attracting second-home owners and tens of thousands of visitors every summer.

While north-central Minnesota is in the coniferous forest biome (or Laurentian Mixed Forest), we use the Ecological Classification System (ECS) to focus landscape information on a more local level. The ECS divides the landscape into progressively smaller areas based on similarities and differences in climate, geology, natural features, and plants. This webpage focuses on two ECS subsections: the Chippewa Plains and Pine Moraines—Outwash Plains, which both contain a combination of deciduous and coniferous trees.

A detailed plan created by the DNR for the Northern Minnesota Drift and Lake Plains Section helps land managers put their land in context with state land management goals for the area. In addition, the Minnesota Forest Resources Council has created a North Central Landscape Management Plan to guide any landowners toward common management goals for sustainable forests, clean water, productive forests, and healthy wildlife habitat.

A watershed is the total area of land surrounding a body of water (such as a lake, river, or stream) that drains water into that body. Small watersheds surrounding creeks and streams join to create larger watersheds surrounding major rivers. North-central Minnesota is located along a great divide in North American water flow. Depending on your land's exact location, your actions can affect the quality of water that will flow either into Hudson Bay or into the Gulf of Mexico.

Woodlands of Minnesota Handbook—CP-PMOP - is both a reference and workbook. It contains information on the past and present condition of land in the regions, insight into some of the biggest challenges woodland owners face here, and tips for making and accomplishing goals for your woods.