The Minnesota Department of Natural Resources (DNR), Division of Parks and Trails, has contracted with architectural and engineering firm TKDA to evaluate the existing conditions of the Eagle Rock Vista area, including the Interpretive Center, at Blue Mounds State Park and to develop three concepts for the future use of the area (refer to park map). The Interpretive Center was the former home of author Fredrick Manfred and is commonly referred to as the Fredrick Manfred Visitor Center.

The project considers various alternatives for enhancing the space for public use, education, and appreciation, while highlighting the landscape that inspired Frederick Manfred’s work. Each design alternative aims to offer an appropriate structure and/or landscaping design that provides park visitors with a gathering, staging, and launching point for entry into the southern part of the Blue Mounds State Park trail system.

The three concepts range from a modest level amenity intended to meet the basic needs for a trailhead, to a more moderate level of amenity with more robust public facilities, most notably a picnic shelter and space for events such as interpretive programs, weddings, or other gatherings.

Interested individuals can review the project information and conceptual designs linked below. The DNR collected comments from the public on the concepts during March 2021. The public could submit comments via email, an online survey, and a paper survey at the Rock County Community Library in Luverne. The DNR will consider the comments received as the project moves forward.

Eagle Rock Vista is a place to examine the past, experience the present, and ponder the future. As the southern trailhead for Blue Mounds State Park trail system, Eagle Rock Vista provides access to all trails above the cliffline. As visitors approach the park from Luverne and Interstate 90, they catch their first views of the Blue Mound; the entrance road climbing the hill to the Eagle Rock Vista parking lot often draws visitors to visit that site first. The parking area provides a significant view of the Rock River Valley and surrounding landscape. From there visitors walk up a short trail to the now closed Interpretive Center and former home of Fredrick Manfred, built against a backdrop of natural cliff and historic Sioux Quartzite quarry. From this jumping off point, hikers can visit Eagle Rock (the highest elevation in the park) and the top of the historic quarry, as well as access the Mound Trail, Upper Cliffline Trail, Bur Oak Trail, and the Western Loop Trail. 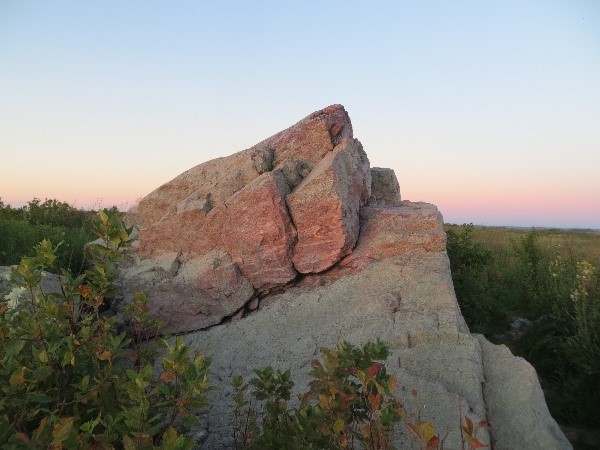 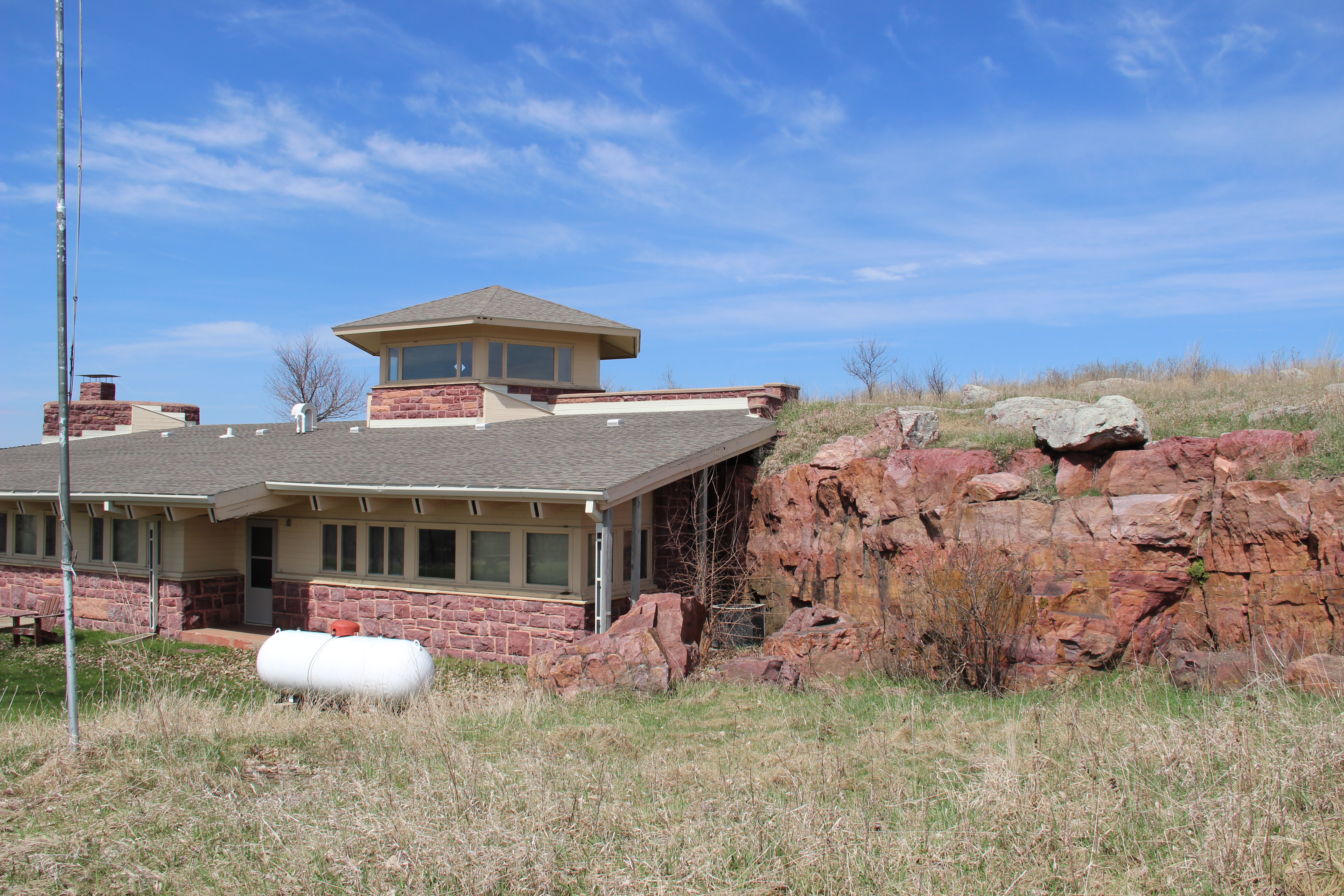 In 2020, 65,118 visitors visited the Eagle Rock Vista entrance of the park, out of 285,408 total visitors to Blue Mounds State Park. It was the highest visitation recorded in the park’s history, in part due to a nationwide trend of increased outdoor recreation during the Covid-19 pandemic.

Why are we undertaking this project?

Upon discovery of significant water damage to a structural portion of the Interpretive Center, in 2015 the DNR determined that the building was unsafe for occupancy and closed it to public use. The determination was based on a structural engineer’s inspection of the severely rotted structural beam, continued moisture infiltration, and mold issues. Subsequently, DNR contracted with TKDA to assess the existing condition of the building and develop concepts for the future use of the area.

Based on this assessment, the decision was made to deconstruct the building and construct new trailhead amenities to serve park visitors.

What is being proposed?

In this concept, the Interpretive Center is mostly removed except for stone retaining walls that can be safely preserved. The Department will resurface the parking lot and add trailhead amenities like a vault toilet, seating and bike racks. These amenities are placed close to the parking lot and out of view from the picnic area and Eagle Rock Vista.

In this concept, the trailhead improvements and the disposition of the Interpretive Center remain the same as shown in Concept 01. A new picnic shelter has been added to the southwest of the building footprint. The shelter is oriented to highlight the views to the south and take advantage of the protection offered by the Sioux quartzite bluff directly to the north.

In this concept, the trailhead improvements and the disposition of the Interpretive Center remain the same as shown in Concept 01. A new picnic shelter has been added to the footprint of the Interpretive Center in the location of the former sunken living room. The location takes advantage of the same vantage point as the living area and incorporates the triangular fireplace. A new floor for the shelter would be built over the existing building slab to cover the heaving slab and provide an accessible uniform surface.

This site is home to significant natural and cultural resources, which require due diligence whenever a redevelopment project is considered.

Blue Mounds State Park is a site of outstanding biodiversity significance—it serves as a refuge of remnant native prairie in Minnesota and provides habitat to a large number of rare grassland and rock outcrop species. At the time of the Public Land Survey (1847-1908), Minnesota had 18 million acres of prairie. Today, only a little over one percent of native prairie remains. Prairie is North America’s most endangered habitat, and once it is lost it is gone forever. Even our best, most costly prairie reconstructions only have one-third of the plant species of a healthy remnant native prairie. It is important that we protect this remnant prairie as we redevelop this site. 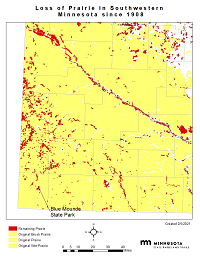 Additionally, the native plant communities surrounding the Interpretive Center are classified as imperiled in Minnesota and provide critical habitat for rare species such as Western Prairie Fringed Orchid.

The Interpretive Center at Blue Mounds State Park also serves as an important overwintering spot for hundreds of snakes. All five species of snakes that occur at the park use this site. The final design will offer protection for the snakes and their overwintering site.

Minnesota state statute directs that state parks be managed to preserve and perpetuate the natural features that existed in the park prior to European settlement as well as other significant natural, scenic, scientific or historic features present. These significant natural resources will be considered and protected as we continue the design of the Eagle Rock Vista area. 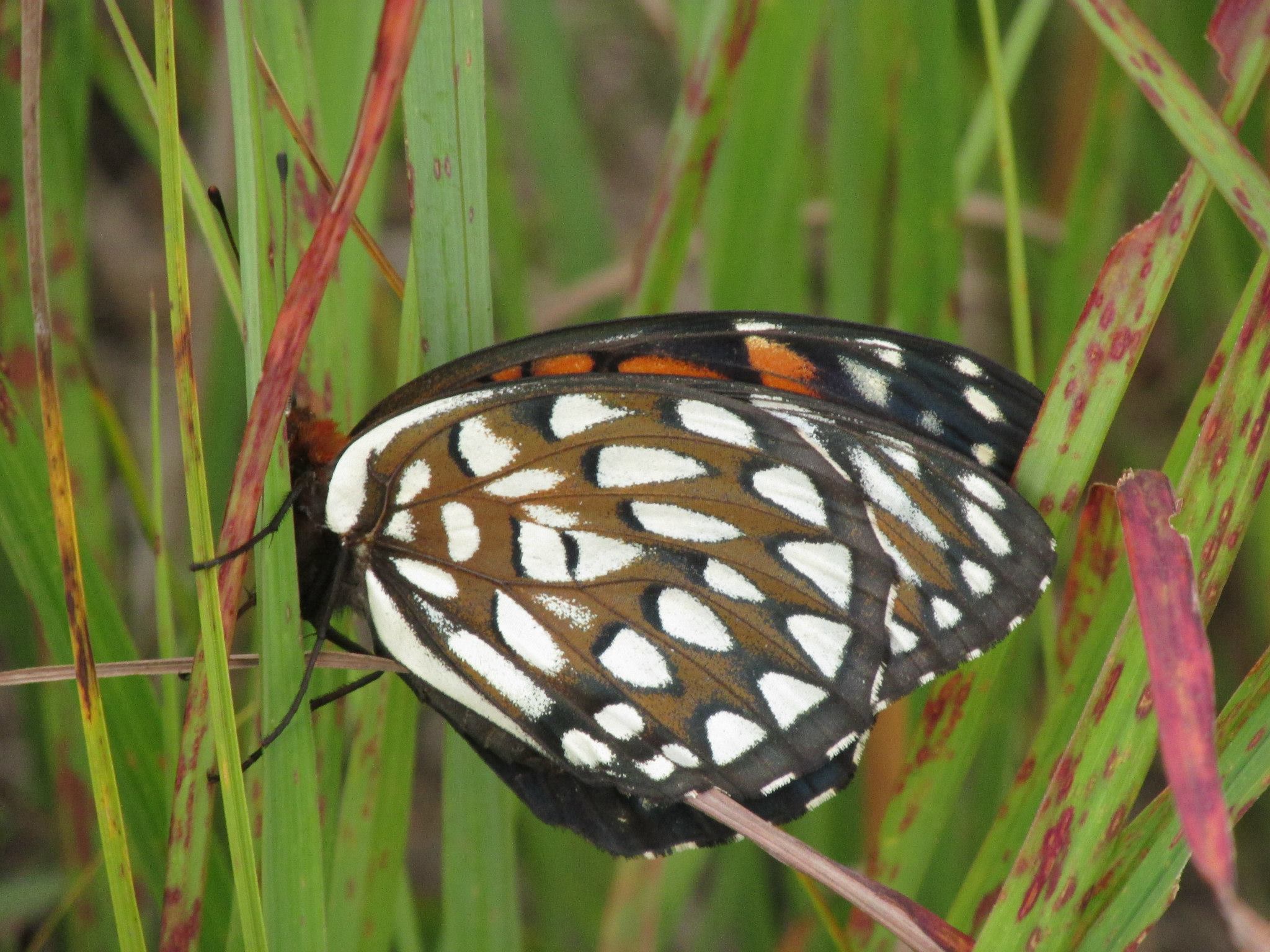 Many prairie butterflies, like this regal fritillary (Speyeria idalia), are found at Blue Mounds. The regal fritillary is a species of special concern in MN due to loss of prairie habitat. Picture by Chris Smith, MNDNR.

During his roughly 50 year career, Frederick Manfred—born Feike Feikema—published more than 30 novels, many of which were set in his fictional “Siouxland”—the region of the Big Sioux River drainage basin, encompassing parts of Iowa, Nebraska, South Dakota, and Minnesota. According to his family, Manfred was nominated for the Nobel Prize in Literature five times. It is perhaps his series, “The Buckskin Man Tales,” for which he is most well-known. The first in the series, Lord Grizzly (1954), told the true story of Hugh Glass, a 19th century hunter and tracker who was attacked by a bear and left for dead by his companions, only to survive and seek revenge. It was a national best-seller and finalist for the National Book Award. While residing at the Blue Mounds house, Manfred added two more books to this series as well as other novels, poems, and a screenplay for Lord Grizzly. After the state’s purchase of the property, Manfred built another house—which he dubbed Roundwind—not far away with views of Blue Mound. His writing at Roundwind continued until his death in 1991.

The Interpretive Center at Blue Mounds State Park has been found eligible for listing in the National Register of Historic Places for its association with author, Frederick Manfred, as well as for its significance in architecture. The building was designed by architect and friend of Manfred, Myron Kehne, as a late representation of the Prairie Style most often associated with Frank Lloyd Wright. The design utilized the natural landscape both on the interior as well as the exterior, and used natural materials—such as wood and stone—extensively. This is especially evident in the exposed rock face back wall of the building, a feature that would ultimately lead to its demise. The plan clustered the public spaces of the house—the living, music, and dining rooms, and the kitchen, in one portion of the building and the private spaces—the bedrooms and writing room—in the other. Often the Prairie Style was heavily focused on site and landscape. For Frederick Manfred, the house focused not only on the immediate site and landscape but reached beyond, to that of the region as well to the landscape that inspired his work.

Recognizing the significance this landscape played in inspiring Manfred and countless others who have visited this beautiful setting, Eagle Rock Vista is envisioned to continue to be a place to examine the past, experience the present, and ponder the future. Exhibits at Eagle Rock Vista could explore the themes listed below, dependent on the final design concept chosen for the site:

When will the new trailhead open?

The tentative project schedule is as follows:

What are physical limits to the size or area to be developed?

High quality prairie surrounds the site, so the footprint of the Interpretive Center and currently mowed area around the building define the boundary for the redevelopment.

Why is the foundation and masonry of the building proposed to remain?

The foundation and masonry provide important overwinter space for several species of snake. Further study is needed before considering removing these portions of the building.

Is it a good idea to build a picnic shelter or trailhead near a snake hibernaculum?

Snakes are very common throughout Blue Mounds State Park. In the spring and fall there may be higher concentrations along the cliffs and rock outcroppings as these provide important overwintering locations. During these times, use of the area may be less desirable for some visitors. There is no anticipated adverse effect to the snake population.

What does it mean that the Interpretive Center is eligible for listing in the National Register of Historic Places?

To be eligible for listing in the National Register of Historic Places means the property exhibits both the significance and historical integrity that is required in order to be considered for inclusion. This status does not guarantee future listing, but provides the preliminary background information that would be required, along with additional research and documentation, in an official nomination. Neither a property’s eligibility, nor listing in the National Register of Historic Places, definitively protects the resource from removal. Rather, it provides that appropriate consultation with the State Historic Preservation Office occurs, in order to fulfill requirements set forth in state and federal preservation laws.

What caused the house to fall into disrepair?

The site onto which the house was constructed is not suited for an enclosed structure or materials subject to water damage; it is the location of the house and its structural members being tied into the cliff that have caused the structural damage. There is no practical solution to remedy this situation. Further, the ongoing moisture intrusion has resulted in mold and mildew growth and poor air quality. Deferred maintenance is not a primary cause of the current condition of the house.

For questions on this project, please email eaglerock[email protected]