The geologic history of Blue Mounds State Park is long and compelling, and many parts of this story are well displayed in the park. It spans nearly 2 billion years and involved tropical weathering of the Earth's most ancient crust; development of some of the earliest life forms; rain storms that repeatedly spread sand across broad, unvegetated valleys; tectonic upheaval; percolating groundwater that cemented the sand into sandstone, and eventually turned sandstone into the rock type known as quartzite. One and a half billion years later, layers of sand and mud were deposited into oceans that lapped against the quartzite cliffs. Later still, thick glacial ice scraped across the landscape and deposited a mantle of boulders, gravel, sand, and clay. 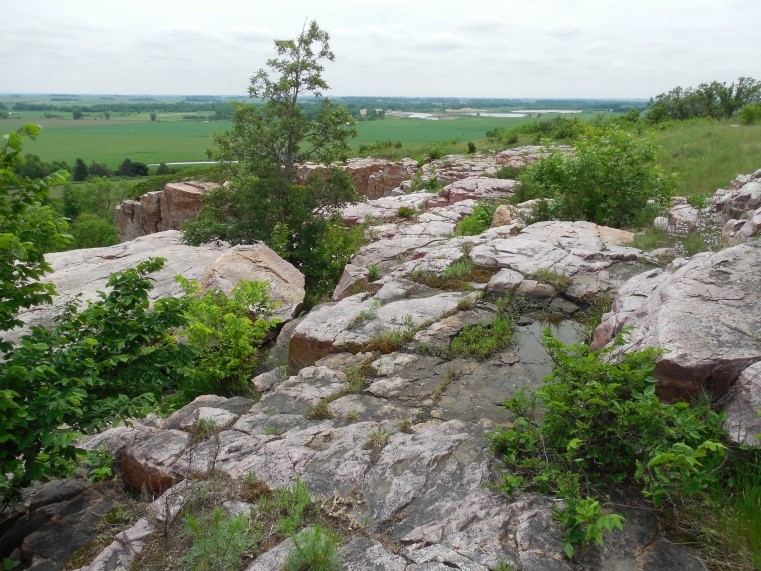 The rock outcrops that rise above the prairie to create the backbone of the park are part of a rock formation formally named the Sioux Quartzite. The quartzite and others like it originated by the deposition of sand in rivers that flowed during the Paleoproterozoic time period (2500-1600 million years ago or Ma). A more specific age of about 1680 Ma can be inferred from correlation of this uniquely quartz-rich rock type with other occurrences exposed discontinuously in central North America and on other continents that are now parts of Australia and Siberia. Quartzites of this type represent unique “signature units” among geologic formations because of their antiquity and remarkably large content of quartz sand. The portion of quartzite termed the Sioux extends from New Ulm, Minnesota, more than 500 miles west into adjacent parts of South Dakota, Iowa, and Nebraska. The originally flat-lying layers of quartzite (beds or bedding) were deformed and now dip shallowly to the west in the northern two-thirds of the park, and turn to dip more northerly in the southern part of the park. Layers that are slightly harder or less fractured form long, narrow ridges that project a few feet to several tens of feet above the surrounding prairie. Although the quartzite is thousands of feet thick, bedrock exposures in the park represent only a small fraction—approximately 550 feet—of this total thickness (see image below). Color variations within the quartzite from pale pink and purple to deep red and purple reflect differences in the flow of streams that deposited sand. Visible structures indicating stream deposition include cross-bedding, ripple marks, and rain-drop imprints—all preserved despite cementation by silica (quartz). Several other significant geologic events occurred in the region after quartzite formation. Well drilling near the park indicates the quartzite is overlain by weakly cemented sandstone and mudstone that was deposited as sand and mud in an oceanic environment during the Cretaceous time period (~145-65 Ma).

No exposures of these strata occur in or near the park. By contrast, the effects of continental glaciation are well displayed in the park. They record processes and conditions that prevailed in the relatively recent geologic past, approximately the past 2 million years of earth history. Glaciation in the midcontinent involved multiple episodes during which very thick ice (1000 feet and more) moved southward from what is now central Canada. Evidence in the park for glaciation includes scrapes (striations) and chatter marks on rock outcrops that indicate movement of ice across the bedrock surface, boulders of locally derived quartzite that have been moved and rotated by the ice, and rare "erratic" boulders carried by glacial ice from ancient granitic terrane many miles north of the park. These features represent one of the oldest glacial events recorded so far in Minnesota (~575,000-740,000 years ago). This comparatively long duration of bedrock exposure likely contributed to prominent features on outcrop surfaces that are related to abrasion and polishing by wind-blown sand (ventifacts), and cycles of melting and thawing (frost heaving). From the south end of the park you can see gravel pits in sediment deposited by meltwater streams that emanated from more recent glacial events (in the range of 16,000-20,000 years ago). These sand and gravel layers hold the shallow groundwater used by many in the region.