Most visitors to Forestville/Mystery Cave State Park are aware that a town once flourished within the boundaries of the current park, but did you realize that the park also contains the town's cemetery with burials from the 1850s?

Hi, my name is Kery Erickson and I'm an Interpretive Naturalist here at Forestville/Mystery Cave State Park. This videocast is about one of my favorite park destinations, the Zumbro Hill Cemetery. The trail is reached by parking at the Historic Forestville lot near the 1899 steel bridge. Walk across the bridge and continue down the gravel road about 1/2 mile beyond the historic site. The trail leads to the left next to several large white pines. After a short distance you will pass the 1880 school and the brickyard before turning right up a steep hill to the Cemetery. At the top of the hill you will find an interpretive sign listing the known burials. 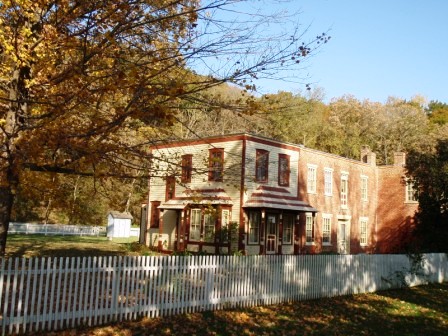 This now isolated cemetery once played an important role in the social fabric of one of southeastern Minnesota's early towns. Over one hundred and fifty years ago, Forestville was a boom town in the Minnesota Territory. Established in the early 1850s, by 1857 the town was home to 104 residents, who could shop at the general store, send their children to the school made from bricks at the local brick yard, stay at one of the two hotels, buy locally made furniture, or use the services of the blacksmith, lumber mill, or gristmill. There was even a distillery that supplied residents with pure rye whisky.

However, life in this up-and-coming pioneer town was hard. Children succumbed to diseases that are prevented by routine immunizations today, women died in childbirth, and infections are easily cured by modern medicine killed many adults. Medical care was often unavailable or insufficient, and average life spans were much shorter than today. For example, the average life span of a male born in 1850 was 38 years.

This didn't mean that most men died at age 38; it meant that many boys died before their fifth birthday. Those who survived to age five frequently lived until age 60 or older. It is not surprising then, that a number of young children were buried alongside the adults who died in the early years of Forestville.

One of the earliest known burials at the cemetery is Hokah Basset, daughter of Gilbert and Mary Bassett. Hokah was just over one year old when she died. We don't know what caused her death, or the death of her sister Lydia Luvia Bassett. Lydia died two years after Hokah, at age 18. Lydia's unusual middle name was likely selected to honor her maternal grandmother, Luvia Smith.

The sisters' graves can easily be found at the cemetery; simply walk over near the two stones that remain standing upright near the back of the cemetery. Hokah and Lydia's names are on the side of the larger monument, which is also shared with Samuel Smith, their maternal grandfather. Smith was 82 at the time of his death. The girls' graves are marked with simple stones on the ground just to the right of this monument. 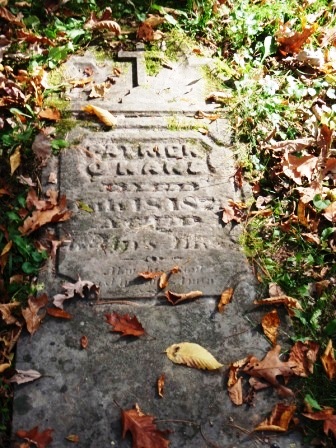 Other stones reflect the sense of sorrow felt by relatives after the loss of a family member; near the center of the cemetery is Joseph Bisby's grave, which bears a weeping willow above the words "My Husband." Bisby was a prominent member of the community, and the first known school session in Fillmore County was held in his home. His wife Charlotte, who likely selected the poignant epitaph, and four children apparently felt his loss deeply; many years later, Bisby's eldest son named his firstborn boy Joseph in memory of the man buried in Zumbro Hill Cemetery.

The markers themselves are made of marble, which unfortunately weathers rapidly, increasing the difficulty of identifying those who are buried in the cemetery. No records exist for most of the burials, and finding information from the early years of Forestville has proven difficult. Approximately 15 of the about 30 graves in the cemetery no longer have or never had markers.

However, one family found a more obvious way to mark the grave of their loved one: the two white pines near the back of the cemetery were planted on both sides of a headstone, which the trees have grown around. Although the stone is not legible, the grave itself is clearly evident.

The fact that marble was used, instead of wood or locally available limestone, also demonstrates the importance of the cemetery to local residents. In 1850s Forestville there were no undertakers or hearses; the deceased were often bathed, groomed, and dressed in their finest clothes by family members, placed in a simple wooden coffin made by the local carpenter, and driven up the hill by horse and wagon on the former cart trail, which can be seen as a washed out ravine along the right side of the current trail. The wooden casket would be placed directly in the ground at the end of the service, which likely consisted of Bible verses read or recited from memory and perhaps mourners singing a hymn at the grave.

Most of the known burials reflect the life of the town itself; the most numerous are from the boom years of the early 1850s. In the mid 1860s the Civil War and the lure of other frontiers drew many residents away. By 1868 when the Southern Minnesota Railroad had decided to bypass the town in favor of another route, the town was already in decline.

By 1899, the entire town was owned by the Meighen family and only supported a small population of their workers. The last burial in the cemetery occurred that year.

The town was abandoned in the early 20th century, and the cemetery largely forgotten until Forestville State Park was established in 1963. Today, park staff maintain the area around the known burials, where the inhabitants of the Zumbro Hill Cemetery overlook the prairie grasses and wooded hillsides that originally drew them to this quiet corner of Minnesota.

If you would like to know more about the early citizens of Forestville, you can read the Minnesota Conservation Volunteer article Ghost Towns, or visit Historic Forestville and take a tour. The Minnesota Historical Society has additional information and photos.