You're watching a live view of flood control impoundment in western Minnesota. The site is very popular with waterfowl. Ducks, including mallards, green-winged teal, northern pintails, gadwall, ring-necked ducks, and redheads are commonly seen at the impoundment feeding in the shallow water on aquatic invertebrates and submerged plants. Canada geese are common throughout the fall, and greater white-fronted geese and snow geese have been noted during migration, both in the spring and fall. Geese often feed in surrounding grain fields, and loaf, or rest, in the shallow water and mudflats. While there is no hunting at this site as it is within a State Game Refuge, the immediate surrounding areas see improved waterfowl hunting given the proximity of the impoundment. Water levels on the impoundment are currently low as we are not in a time of flooding, this provides good feeding conditions for waterfowl and other shore birds.  Move the red dot backward or click on the red slider to view footage from the last 12 hours. There is no sound on the stream. 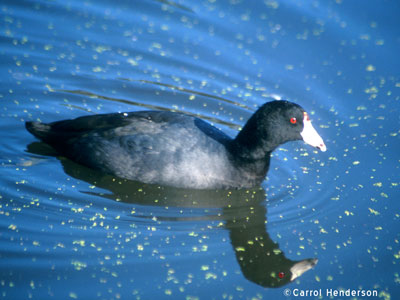 Other water birds at the impoundment

Other common water birds at the site include pied-billed grebes, American coots, great egrets, great blue herons, and ring-billed gulls. The mudflats and shallow water areas of the impoundment are popular with various migrating shorebirds throughout the fall. Greater and lesser yellowlegs, least and pectoral sandpipers, American avocets, American golden plovers, and more have all been noted at different times during migration at the site. All this bird life attracts the attention of raptors: bald eagles, various hawks, and even peregrine falcons are common visitors of the area.

During most falls, there is more water at the site. But because of the current drought conditions, little water is available for flooding managed cells. Water at the camera site has been in this cell since spring, and is receding quickly. While water is important for feeding and resting waterfowl, those mudflats created by dry conditions are very important for shorebirds to find the invertebrates (‘bugs’) they need to fuel their long migration, which may cover thousands of miles!