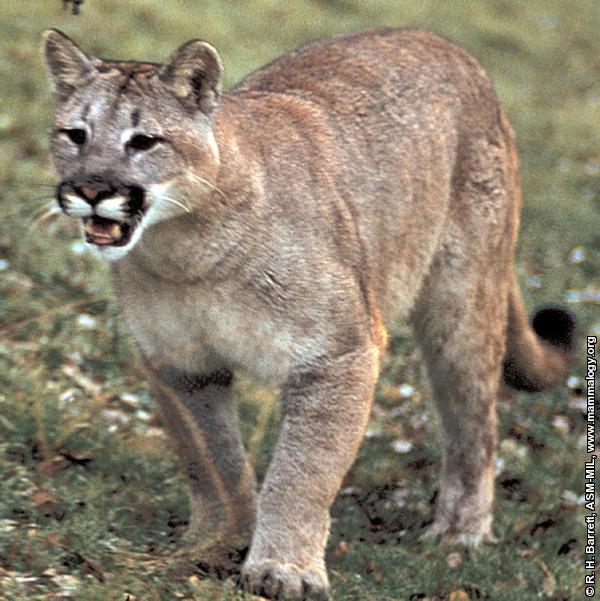 The cougar – sometimes referred to as a mountain lion or puma – was found throughout most of Minnesota prior to European settlement, though never in large numbers. Today, they are rarely seen but occasionally do appear.

While evidence might suggest the animal's prevalence is increasing, the number of verified cougar observations indicate that cougar occurrence in Minnesota is a result of transient animals from the Western Dakotas.

In addition, DNR annual scent-post and winter tracking surveys have recorded no evidence to suggest the possibility of a resident breeding population of cougars in Minnesota.

Although some cougar sightings in Minnesota are accurately identified, many observations from trail cameras and tracks turn out to be cases of mistaken identity. Bobcats, house cats, coyotes, wolves, fishers and light colored dogs have all been mistaken as cougars.

Because cougar observations are very rare, the DNR is interested in gathering information that can be verified by photos or physical evidence of a cougar sighting. Observations can be submitted to a local wildlife office or conservation officer.

Human encounters with cougars are extremely rare. Even in California, which has a population of more than 5,000 of the big cats, a person is 1,000 times more likely to be struck by lightning than attacked by a cougar. Most cougars will avoid confrontation. If an encounter should occur:

Where do cougars originate?

Some cougars confirmed in Minnesota have had captive origins. Released or escaped pets often cannot be distinguished from wild animals until they are killed or captured and then only if they have obvious indications of captivity such as tattoos, de-clawing or tame behavior. Some cougars have not had any apparent evidence of being in captivity and may have been truly wild.

Since 2007, DNR has verified 14 sightings in Minnesota from trail camera photos of cougars, several cougars that were killed or found dead and other signs such as tracks. From dead cougars and biological samples collected, DNA evidence has linked these primarily to the populations in the western Dakotas. 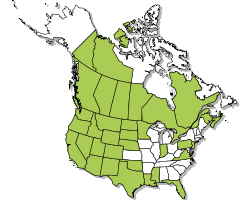 Several hundred miles separate Minnesota from the nearest known self-sustaining breeding population of cougars, estimated to number around 250, in the Black Hills area of South Dakota and, to lesser extent, the North Dakota Badlands. The only known population of cougars east of the Mississippi River is in Florida. Known as the Florida Panther, an estimated 90-100 wild animals continue to roam.

In the mid-2000s, a cougar that was fitted with a radio collar in the Black Hills was later located with telemetry equipment on the Roseau River Wildlife Management Area in northwestern Minnesota. This animal was there for about seven weeks before disappearing. It is possible that additional animals dispersing from the Black Hills or other western areas enter Minnesota.

Most animals confirmed in the Midwest during the past 15 years have been young males, the segment of a cougar population most likely to disperse in search of new territories. No females of suspected wild origin have been identified in Minnesota, and cougar tracks have not been recorded during annual scent-post and winter-tracking surveys. These facts suggest that the state does not have resident cougars.

It is most likely that transient animals (young male dispersers) are wandering into and through Minnesota. Once here, cougars are not restricted to territories by neighboring members of their species and can move freely.

While potential prey such as deer is abundant in Minnesota, dispersing cougars are not likely to stay in one area for long, instead continuing to search for suitable habitat with potential mates.

How will I know if it's really a cougar?

It is not unusual for people to mistake other animals for cougars. To identify a cougar, it is helpful to know that adult males can reach 200 pounds but most are much smaller and average about 150 pounds. Adult females usually weigh about 90 to 110 pounds.

The head appears small in relation to the body, which ranges in length from four to six feet overall. The body is tan except for dark face markings and the tip of the tail, which is nearly as long as the body.

How many cougars are there in Minnesota? 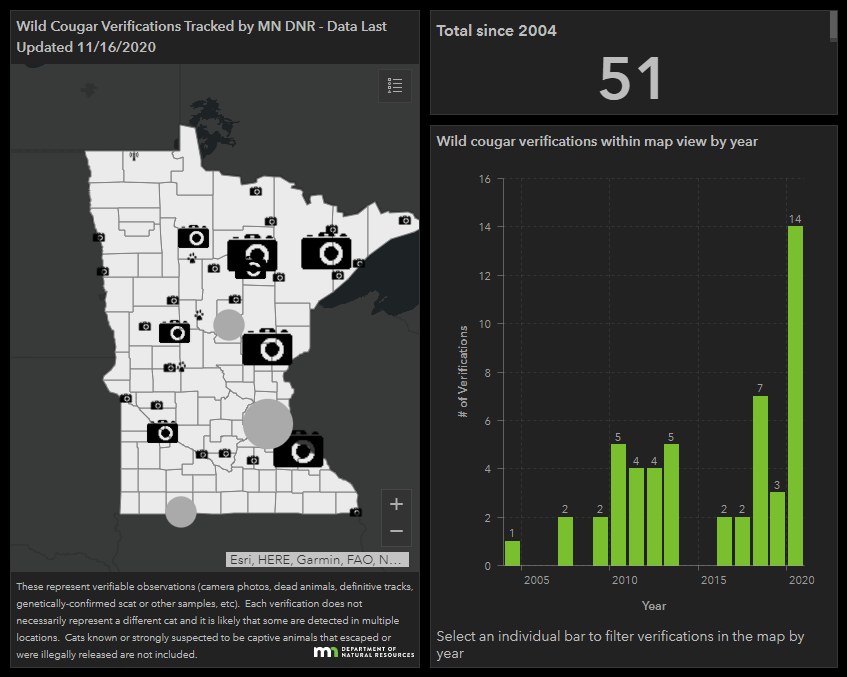 There is no evidence that Minnesota has a self-sustaining, breeding population. And, because of their highly secretive nature and tendency to wander, it is nearly impossible to accurately determine how many individual cougars there might be in Minnesota.

During the past 30 years, DNR biologists doubt there has ever been more than a couple wanderers in the state at one time. Nevertheless, some sightings are confirmed, and cougar sighting confirmations in the midwest have increased in the recent past.

It is difficult to predict whether or when enough dispersing animals – both males and females – might settle in Minnesota and establish a small population.

What do cougars eat?

Cougars subsist primarily on mammals, primarily ungulates such as deer, but also rabbit, squirrel, porcupine and other smaller animals.

When opportunity presents itself, cougars may go after farm livestock or pets. While the Minnesota DNR has received reports of cougars attacking livestock, there has not been an actual confirmed case of predation of livestock in Minnesota.

What should I do if I think I saw a cougar?

Report what you saw as soon as possible to the nearest area wildlife office or conservation officer. Note the date and time of the possible sighting, the location where the animal was seen and a description of what you saw.

If the opportunity presents itself, take a photograph of the animal or other potential evidence such as tracks. The DNR collects reports from citizens. Any physical evidence that could indicate the presence of a cougar will be investigated and proper steps taken to ensure public safety.

What should I do if I encounter a cougar?

An encounter would be extremely rare in Minnesota. Cougars hunt by stalking and attacking from ambush and, if encountered should be, faced directly. Recommended actions include making yourself appear large by holding your arms above your head, waving a hat or jacket, talking loudly and firmly and throwing rocks or sticks at the animal to chase it away.

If actually attacked, hit the animal in the face and head with anything handy. Don't run, crouch or lay down. Try and stay above the animal and give the animal a clear escape route.

Can I shoot a problem animal?

No. Cougars are protected by state law. Only public safety officials are authorized to kill a cougar that proves to be an imminent threat to humans.

Will the DNR remove a cougar?

Relocating problem animals usually is impractical because the same problems could occur at new release sites. Due to the transient nature of cougars in Minnesota, it is extremely difficult to capture a cougar based on an individual incident.

Deporting them to western states, where cougar populations already exist, is often prohibitively expensive and can also result in territorial struggles and the death of the released animal.