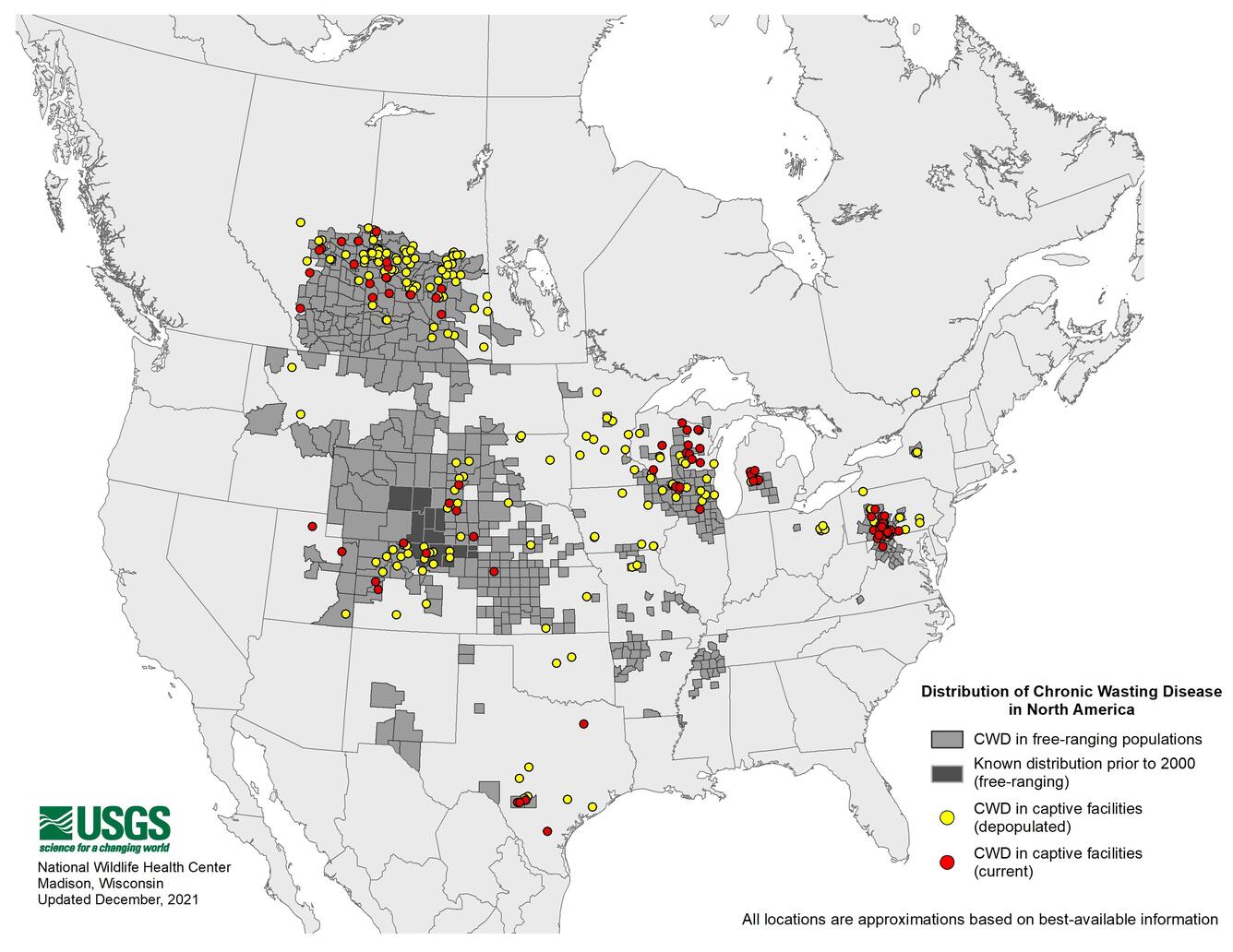 Map showing where CWD has occurred in North America.

Chronic wasting disease (CWD) is a neurological disease affecting the cervid family – deer, elk, moose, reindeer and caribou. It causes characteristic spongy degeneration in the brain of an infected animal.

CWD belongs to a group of diseases known as transmissible spongiform encephalopathies (TSEs). TSEs are believed to be caused by prions, which are abnormal proteins that self-replicate within an infected animal. Prions are highly resistant to disinfectants, heat or freezing. There are no vaccines or treatments for TSEs, and they always are fatal. Several other variants of TSEs exist including:

CWD was first recognized in a captive mule deer at a wildlife research facility in Colorado in the late 1960s. CWD has been detected in wild and/or captive animals across 26 states, three Canadian provinces, South Korea, Finland, Norway and Sweden. It has been detected in white-tailed deer, mule deer, elk, European red deer, sika deer, Manchurian Sitka deer, moose, reindeer and caribou.

How is CWD spread?

It can be spread from both direct (animal-to-animal) and indirect (environmental) contact with infected deer. Prions are shed through saliva, urine, blood, feces and antler velvet. Additionally, carcass parts from a dead infected deer can serve as a source of further infection to other deer in the area. By concentrating deer on the landscape through artificial feeding, or by providing attractants such as salt licks, humans can increase the likelihood of both direct and indirect contact.

What are the symptoms in deer?

CWD is a slow, progressive disease. It can incubate for 1½ to 3 years before clinical signs begin to appear. This means that older deer, males in particular due to their rutting behavior which increases deer interactions, have the highest infection risk.

Throughout most of the infection period, the deer appears to be healthy, but is continually spreading the disease. Clinical signs include:

How do you test for CWD?

There is currently no practical live animal test to determine if CWD is actively infecting a deer. In order to confirm a diagnosis, lymph nodes or brain tissue must be tested.

An initial screening test, called an enzyme-linked immunosorbent assay (ELISA), is conducted which can isolate and detect the abnormal proteins (prions) if they are present in the tissue. If prions are detected, the remaining tissue is sent for a confirmatory test using immunohistochemistry (IHC).

The U.S. Department of Agriculture (USDA) has approved the IHC staining and examination of brain or lymph nodes in order to confirm an animal is positive. If an animal passes the first screening test (ELISA) and no prions are detected, that animal is reported as "not detected" for CWD.

History of CWD in Minnesota

The DNR conducts CWD surveillance of wild deer based on risk from known positive cases in an effort to keep Minnesota's deer healthy. Proactive surveillance and precautionary testing for the disease is a proven strategy that allows the DNR to manage for CWD by finding it early, allowing for quick and aggressive actions to control it.

Since 2002, more than 71,000 wild deer have been tested for CWD in Minnesota; the disease was first detected in wild deer in Minnesota in 2010. The DNR conducts intense, concentrated surveillance in areas around known positives (both within a captive cervid farm or near our neighboring states' borders) for a minimum of three years after an infection is discovered to ensure the disease has not transferred to wild deer in Minnesota.

CWD has also been detected in deer/elk farms in the state. In Minnesota, farmed cervids are classified as livestock and managed by the Minnesota Board of Animal Health. The Department of Natural Resources has no authority to oversee or regulate the farms or the animals. To learn more about farmed cervid management and the Board of Animal Health's responsibilities, please see the review that was recently completed by the Office of the Legislative Auditor.