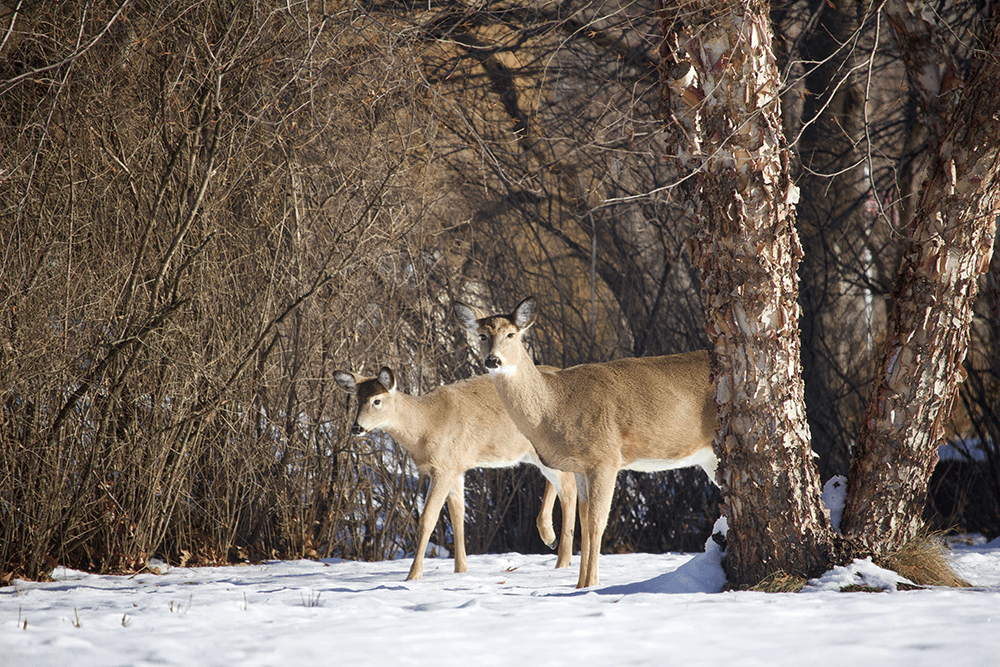 But severe winters with very deep snow and prolonged cold temperatures can increase deer mortality. Other factors such as habitat, food availability and timing of spring green-up can compound or buffer the impacts of a severe winter. 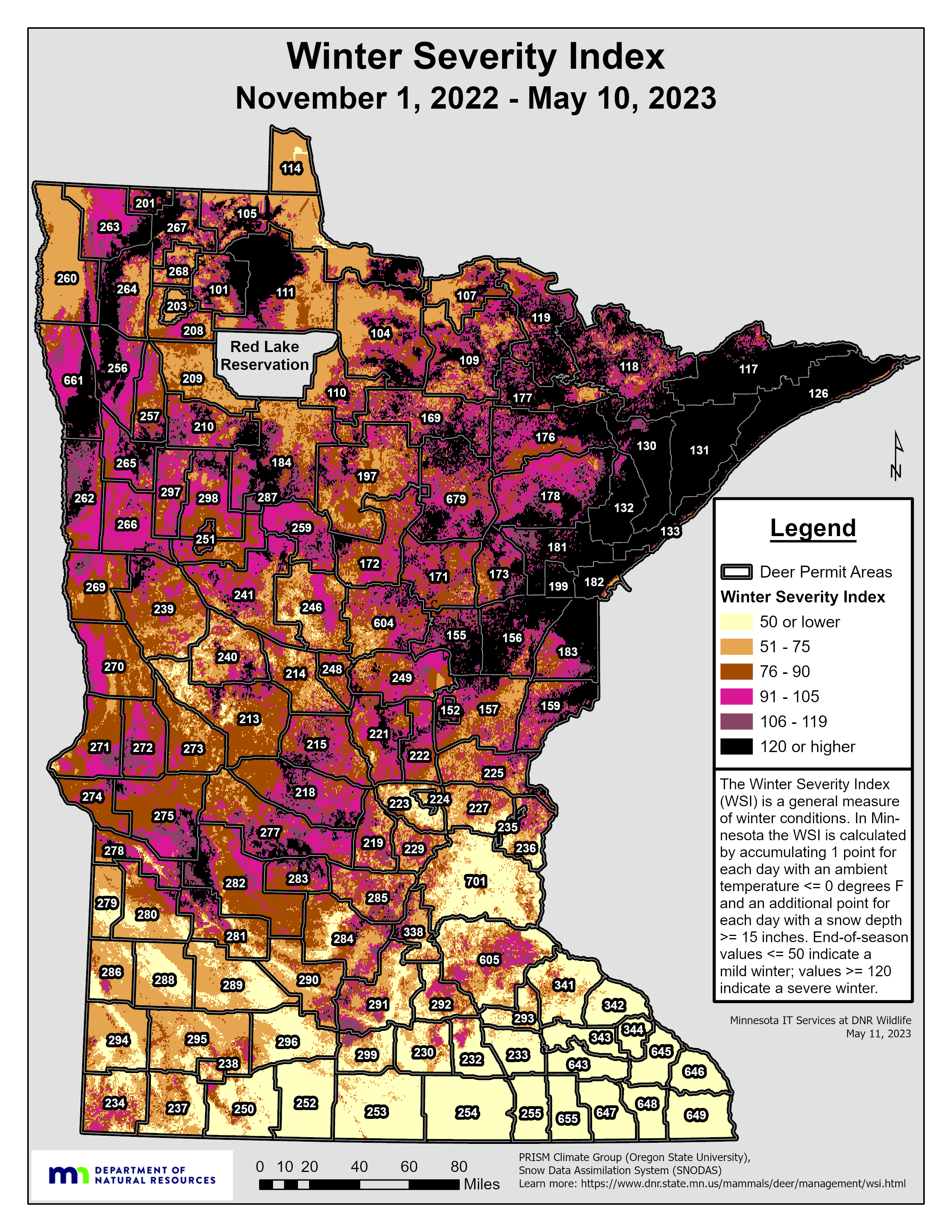 The DNR uses a measurement called the winter severity index to provide a general indication of winter conditions, relying on temperature and snow-depth data. WSI, along with a number of other considerations, can help wildlife managers assess how well deer survive winter.

Although data is collected statewide, winter conditions in Minnesota’s northern forested zone generally have a greater impact on deer populations than elsewhere in the state.

Lower deer mortality may be expected during mild winters and higher mortality during severe winters. But the winter severity index is not predictive by itself because the simplicity of the point calculation does not account for the many other factors, which are listed below, that influence deer survival.

Deep snows have a far greater effect on deer survival than cold temperatures because deer must use more of their energy reserve to move through deeper snow. As snow depths increase greater than 15 inches, they can create increasingly difficult conditions for deer without being accurately reflected in the WSI score.

For example, three feet of snow has a greater impact on deer than 15 inches of snow, but receives the same point value in the WSI calculation.

Duration of winter and timing of spring green-up

An early arrival of green vegetation allows deer to recover more quickly from winter conditions. Pregnant does have high nutritional demands in their last trimesters and throughout the summer while nursing fawns. An early or late spring green-up influences the survival of fawns before and after birth.

Quantity and quality of habitat and forage

The availability of quality habitat and forage will vary from year to year, and geographically — even within the same deer permit area. Deer that have access to good quality forage that provides better nutrients are generally in better physical condition entering winter and have a better chance of surviving a severe winter.

Quality winter habitat includes dense conifer to provide snow shelter. Canopy closure of 70% or greater in close proximity to food resources is considered optimum for deer. Not all dense conifer stands are equally beneficial to deer. The conifer species, amount, age and placement on the landscape are also important.

When winter weather conditions are more severe, especially when there is deep snow, deer are more likely to migrate from their growing season home ranges to winter ranges; they will also concentrate in relatively small areas at higher numbers. Movement to conifer snow shelter (often called “yarding up”) can help deer conserve energy by avoiding the deeper snow in the open, but increases deer densities and competition for scarce food resources.

Sex and age composition of the deer herd

In severe winter weather conditions, fawns are typically most vulnerable, followed by adult males (breeding bucks), and lastly adult females. Fawns with less fat reserves and adult males that have spent much of their fall energy and attention on breeding rather than feeding generally die at a higher rate than adult females during winters with more severe conditions.

As competition for food increases, the areas that have higher numbers of fawns or adult males can experience higher total winter mortality by the end of the season.

Wolf predation of deer increases in winter because deer are more vulnerable to wolves when they become confined to smaller areas and are physically weaker as winter weather conditions become progressively severe. Predation from wolves also increases if the snow pack becomes crusted because wolves can freely move on the snow surface, while deer continue to break through the crust, making escape from wolves difficult. Surplus killing of deer by wolves (when wolves kill more than what they eat to survive) is rare, but does occur under the most severe conditions.

The DNR funded an unprecedented, long-term, 15-year study (1991−2005) in the northern forest, which documented how back-to-back severe winters can have very different effects on the winter survival of deer and the following year’s reproductive success. 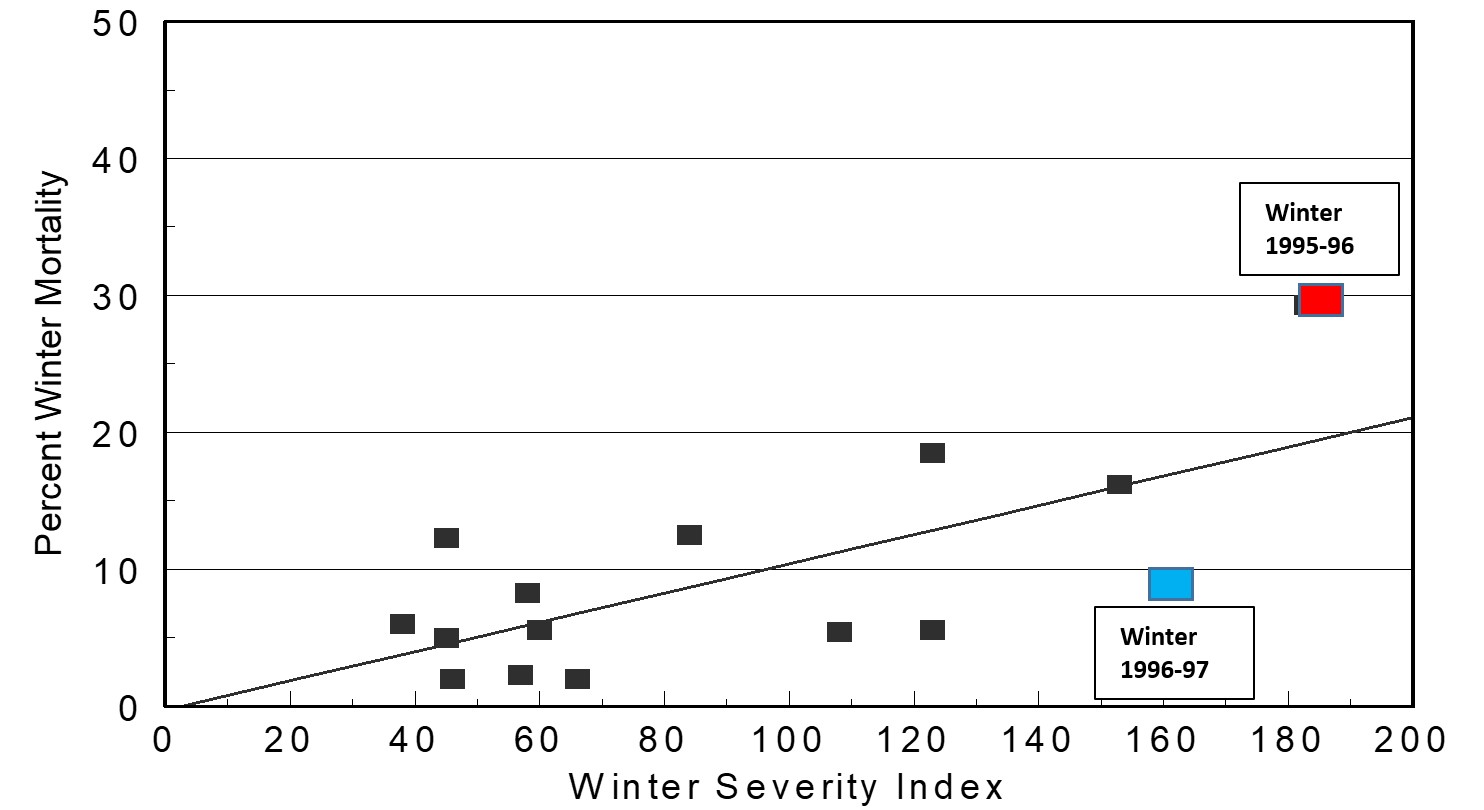 During the first severe winter (1995-96), when deer densities were high, mortality among 80 radio-collared, adult female deer was 32% (red box), while the estimated mortality across populations (including fawns and adult males) of the forest zone was 40%. Although does survived at slightly higher rates that year, their poor body condition meant newborn fawn survival during the following spring was very low; however, during the second severe winter (1996-97), mortality of the adult female study cohort was only 7.8% (blue box) and fawn production and survival were high.

During the first severe winter (1995-96), when deer densities were high, mortality among 80 radio-collared, adult female deer was 32% (red box), while the estimated mortality across populations (including fawns and adult males) of the forest zone was 40%. Although does survived at slightly higher rates that year, their poor body condition meant newborn fawn survival during the following spring was very low; however, during the second severe winter (1996-97), mortality of the adult female study cohort was only 7.8% (blue box) and fawn production and survival were high, which was attributable to the following:

White-tailed deer populations are very resilient due to their high reproductive potential. Annual pregnancy rates average 90% for yearlings and are near 100% for does from 2.5 to at least 15 years old, with more than half of those does having twins.

While winter severity and other factors can cause sharp decreases in deer populations, deer have the reproductive capacity to rebound quite rapidly and can do so if normal conditions continue for 3 to 4 years.